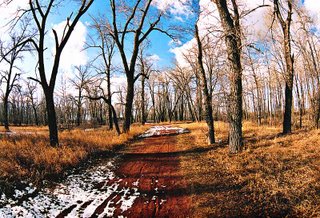 Really just a walk in the park
We live two blocks from Fish Creek Provincial Park. It's one of the largest urban parks in North America, and stretches across the width of Calgary at the south end of town. It's a protected area and has limited access points, resulting in major traffic chaos at times for those commuters south of the park. (we live just north of it hehe)
Our Nissan dealer is south of the park.
My vehicle was in for servicing the other day and when they called that it was ready, I decided that I would walk there, through the park. I figured it would take about an hour.
Now you have to remember that this is truly a wilderness park. There are a series of paved and gravel pathways, and a handful of interpretive centres/washrooms, but other than that, it is left completely wild. It's down in a valley, and you often run into deer and coyotes, and there are the occasional bear and cougar sightings.
As I wasn't exactly sure of the route I needed to take, I decided to take the phone with me, just in case. I'm not entirely sure whom I would have called had I ... I dunno ... encountered a cougar or something. "Hello, could I have the number for Fish and Wildlife, please. I'm somewhere in the bowels of Fish Creek Park and I am being eviscerated by a mean bastard of a cougar. Please hurry!"
So I'm walking along, wishing I had brought a camera with me, because I have never seen the creek quite so high and so fast, and marvelling at the sinkholes that have developed along the pathway beside said creek, when I looked up and thought "hey, I don't remember the creek branching like that!"
And of course, as I got closer, I realised that this new branch of the creek was actually where the pathway used to be - the pathway that I needed to take. That's a picture of it up above. Imagine that with a three-foot wide speedily-flowing stream coursing along it.
I ran into a dude with a dog at the stream/path. His legs were about 7 feet long and he leaped over it no problem, and told me what detour I needed to take to get where I was heading. "You can't get there from here"
So I mustered up memories of track and field day, drawing upon my experiences in the long jump pit, made a couple of false starts, and leapt. And I cleared the bastard!
I was strutting around pretty proudly, when a senior citizen came along on his bike. I helped him pass his bike over the water and held on it while he attempted to forge the stream. This fellow had 25 to 30 years on me, and I just made it over the water, so I figured he was going to wade through it. And damn it, if he didn't jump the creek and made it, no problem. Kind of took the wind out of my sails, I'll tell you. But in my defence, I will say he was a very fit senior citizen.
Still though, I probably shouldn't have told you about this because now I just know I'm going to get picked last for the Blogger baseball team.
Posted by Barbara Bruederlin at 9:57 am

Canada, yay! I found out last night we are flying up second week in September to take the grand tour of the maritime provinces. They say your neck of the woods is beautiful also. How fortunate you are to be so near a national park...

When my 94 year-old mom says she has just returned from walking to and from the post office, I know it is time to get my 'arse in gear' and head to the River for a swim.

I remember when the Bow was starting to look like the Amazon last year, in spring.

We walked down to Kensington, in the middle of it all and the water almost touched the bridge. That's like 2 metres above where the pathway was supposed to be! It was actually kind of scary, cause we're right on the flood plain. Although, probably a little too far from the river to have water creeping up our street in the middle of the night.

Lesson here? Always bring your camera...
For a second I thought you guys still had snow on the ground...

Aren't you lucky, Leazwell! To my great shame, I have never visited the Maritimes, but I really really want to.
I really should go down into the park more often.

You swim in the river, Chuck? I'm assuming it's not like the ones we have around here, where the water comes directly from snow melt in the mountains. C-c-c-c-cold!
Moms are always good for putting us to shame, aren't they? It's part of their job.

It was scary last spring, Hilary. And people died from the flood too.
I grew up in Winnipeg (biggest flood plain in the country) so am used to floods, but it was still freaky to see sections of the pathway completely washed out under MacLeod Trail a year later.

hahaha Barbara W -it wouldn't be the first time we've had snow in June, but no that was an old photo.

Kinda gives puddle jumping a new perspective. I probably would have made the jump, then stumbled backwards or something. I love that picture!

My mum briefly taught the girl who drowned in the floods last year. Scary stuff. But I can imagine the floods in Winnipeg to be much more frequent. We have a cottage a couple hours from Winnipeg, and there can be some serious flooding in that area.

Oh God, Allison - stumbling backwards, that didn't even occur to me. I really would have been embarassed in front of that elderly gent then!

Oh how sad, Hilary. She was so young too. Yeah, a lot of Manitoba is pretty prone to flooding, and combined with the heavy clay soils, mosquitos.

Lucky you to get to see the new park taking shape! And I hope your Nissan is feelng better.

btw, Jerry's nose hair comment has now got my imagination working in such sinister ways that I may not get any sleep tonight.

Yeah, Michelle, water is pretty powerful stuff and I don't even mean Niagra falls. It kind of reminds me of my dad in the spring; he used to dig little tranches all over the place to direct the runoff, sort of a low-grade water engineer.
The Nissan's fine - just a scheduled maintenance. And if it breaks down, we've always got Jerry's nose hairs to tow it to a garage.

Jen, that senior may have bested me, but I could totally take that old guy with the oxygen tank in Safeway.

They didn't even tell you, Maureen? I was wondering where you were! I, of course, got picked last.

ok, let's start our own team - you and I are captains, hahaha

It's a deal, Maureen. I get to pick first!