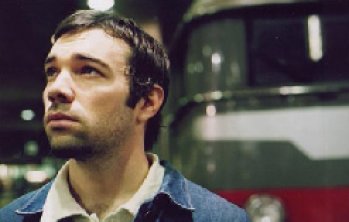 Oh it's going to be Wicked and Weird!

Did I mention that I am going to see Buck 65 tomorrow night? Yes sirree, the pride of Mount Uniacke, Nova Scotia, will once again be gracing the Calgary stage with his unique brand of hip-hop, delivered in that drawling baritone. The spiritual love-child of Tom Waits and John Prine, he spins a yarn like nobody's business. Intelligent lyrics, stylish delivery, and the odd tale about baseball make this performer ever fascinating to watch.

Mr. 65 was recently presented the keys to the community in his hometown, where he was referred to as a pest by his old high school gym teacher. (Aren't they just the same the whole world over?) This is despite the fact that Buck (real name Rich Terfry) is an accomplished baseball player - almost went to the big leagues. Last night his video, Devil's Eyes, won the Best Cinematography award at the Much Music Video awards. At least they got something right.

Buck 65 is touring with Kinnie Starr.

***
Thanks to Will for pointing out that the link to the CBC Arts site had dropped my interview. Oh the pain!

But tonight at supper, I heard a promo for it to be aired tomorrow afternoon.

So here's what I think happened (because frankly I didn't hear it on the radio last Tuesday either): the brass at the mother corp must obviously have decided that it was way too huge of a story to bury in the same week as the opening of the World Cup, so rather than have something this ground-breaking be overshadowed by footy, they decided to hold off until this week, where it could get the attention it deserved.

That's my story and I'm sticking to it.
Posted by Barbara Bruederlin at 6:31 pm

Agree with you on: Devil's Eyes, won the Best Cinematography award at the Much Music Video awards. At least they got something right.

LOL@ the quote of the day!

I'll be at Buck too. AT the Grand, right?

Good thing I read your post - I THOUGHT it was next week. Doh!

The only Buck 65 I know are his released singles, all of which I have enjoyed. Though he pretty much sucked at his Juno gig this year.

That is a very stylish video, isn't it, Jas? I love the film noir feel - the True Crimes approach.

See, Teddy? This is why you need to visit every day. Wilco is next week, though; will you be at that as well?
See you at the Grand!

John, I didn't watch the Junos, as they pretty much suck in general. Most musicians I respect stay away from them, although I guess there is a good deal of exposure to be had from them.

I though Buck 65 was the best part of the Junos...
*shrugs*
Are they going play your full interview Barbara?

Barbara (the other one)- He certainly wasn't the worst part I'll give you that.

Have fun at the concert tonight!

He probably WAS the best part of the Junos, Barbara W and John! I heard they were awful - except for Kevin Drew from BSS yelling "fight for better music, Canada". THAT would have been worth the price of admission.

Thanks Allison - I shall think of you as I take my standard craptastic pictures. Nah, who am I kidding, I won't even try.

Sorry to be the bearer of bad news. I really do wanna hear it. I heard Buck 65 recently and I was really diggin it. Your cd arrived (thank you, thank you), yet our mailman who hates put it in an unreachable place. Hopefully that will be sorted out soon. Look for yours in the very near future.

You get some great music out your way - I'm starting to rethink my long-term living in PEI arrangements. Ah, I guess it'll do :)

Will, I will not shoot the messenger - actually they replayed it this afternoon and have changed it quite a lot, so it should be back up on the site soon.
I'm glad your cds made it (sorta)!
Why does your mailman hate you? Who could possibly hate YOU? And the other, more burning question, is WHERE did he put it, that it was out of reach? (the mind boggles - hahaha)

Maureen, that's the upside to living in the big-assed city. Though sometimes it's not big-assed enough - no Radiohead, no Streets, no Belle and Sebastian, no Neko Case - hell I might as well live in PEI!

I got so caught up in the microscope room this afternoon and I didn't realise what time it was.

I'll see you in July, have a good time at the cottage.

Thanks Jas. It was a really fun concert!
I meant to say bye as well yesterday but got stupidly busy. So bon voyage! Have a great trip.

Not quite sure why the mailman hates us. We live in an apartment building, and the box is very small. Your cd's were place in a top section only the mailman has access to. From there he can slip it mail into each box. Of course a cd doesn't fit coming from that angle.

For whatever reason, he really likes to jam our mail in there, regardless of whether or not it fits ... so we've had magazines ripped and netflix dvds cracked. But its not that often.

Bad mailman!
You guys probably get too much mail for his liking, Will. You are making him work harder than he wants to.
Nothing worse than ripped magazines - argh!

I shudder to think what would happen if I subscribed to one of those awesome British magazines with the free cd.

Yeah, those are BIG magazines, Will. Those Brits - gotta do everything over the top. Oh no, wait, that's you Americans.
I kid of course, but I'd go broke subscribing to NME. They are not cheap by the time they arrive here.