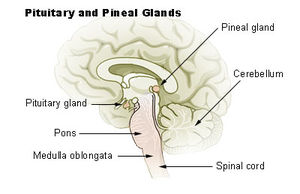 An Innocent Victim of the Pineal Gland

My work schedule is all off this week and I'm having a tougher time dealing with it than I thought I would.

Eva's got exams and they start at 10:00 rather than 7:58 or whatever weird time they usually start school. Being rather paranoid, I shifted my work schedule to ensure that she actually gets to school for her exams: " Get up NOW!"
So I'm starting and finishing work a couple of hours later than normal. I thought I would have a hard time with the finishing late part (and dealing with that aspect of rush hour traffic) but it's the start of the day that's really throwing me off.

I don't sleep in the summer anyway - loud-mouthed birds, no darkness, stifling heat, etc etc, so I'm up at 5:45 as per usual. I thought I would use that morning time productively (I am a morning person after all - love the fresh sweet air and the promise that the day holds), but instead I am finding myself pacing around like a caged tiger, waiting to go to work. How stupid and counter-productive is that?

In my mind, I'm already at work, trying to figure out which bandages I should use today to attempt to patch up the sinking ship. And yesterday, traffic was just as bad as it is earlier in the morning, although today I will try a different route. What really threw me off was arriving at work yesterday. It wasn't that I had to park way at the far end of the parking lot (it's summer - no big deal to walk a few extra minutes), but that the light was all wrong. It was midmorning. I'm used to being one of the first people in to work and now everybody was already at work, had been for hours, and I had all this catching up to do.

I know I have no reason to gripe when lots of people work weird shifts as a matter of course, and believe me, my heart goes out to them. As a teenager, I worked an 11:30pm -7:30am shift (alone, I might add) for part of a summer and I had absolutely no social life. I would get home, bury myself in the basement, and try to sleep and then I would spend the evening knowing that I had to go to work. It sucked donkey balls.

But I can't complain too much, as I'm just doing this for a few days, and I know that some of you have really weird and often inconsistent work schedules to deal on a daily basis. How do you cope with it? When do you do your best work? What's harder - working straight evenings or nights or shifting around all the time?

Posted by Barbara Bruederlin at 7:22 am

Coffee or Meth. They both get the Jetson out of bed in the morning. One does require me to where a diaper, but hey, at least i'm not late for work. Where do I work again? Where are my pants? Who's blog is this?

I can totally relate to the caged tiger feeling, whenever I work a mid-afternoon shift. I'm not the most productive person in the morning, so I end up sitting and waiting (or going in early). Luckily this summer I'm working 9-5, so its not that bad. But when I was 17 I worked a midnight shift (11-7, alone too) and I found myself sleeping for only 5hours during the day and then getting up in the afternoon because it was just so bright. Eventually after weeks of that, you just crash, and sleep for days. Its just a matter of adjusting your body, I've yet to find a good system. Hopefully, you'll be back to your routine soon!

Jetson, what do you need pants for if your jewels are adequately contained in a diaper?
Tim Horton's carries meth now? Cool. I'm buying shares.

I only have to do this for a few days, Allison, so I really have no reason to bitch as much as I do. I just like bitching!
How come they always put teenaged girls alone on the overnight shifts? I realise nobody with any seniority wants to work them, but I also know that I wouldn't have had the resources to deal with any ugly situations, had they arisen.

I too did an overnight shift at a gas station/depanneur when I was 18 (alone). That job did not last TG. My friend whom I worked with did get held up when he was working the same shift alone one night. He was held at gunpoint and marched into the back, on his knees, to open the safe. Don't worry he was ok. Shaken, but ok. I did not even find that out from him, but years later from the managers. They had it on tape and would play it for laughs (may they be plagued with a thousand flees).

Legally, 2 people are suppose to be on at all times, but certain coffee shops can get away with it (cough, cough Tims). And it was my first job and I couldn't say no. I think I gave my mom an ucler tho.
barbara - That's horrible! My midnight experience wasn't nearly as bad, I just had to deal with drunk ppl at 3am.

That's really gross, Jen! How can you possibly organize your life with those kind of shifts? I have a hard enough time without shiftwork. But I'm older than you, so.

My first husband had terrible non-stop rotating shifts in the Army, it was really hell on the relationship. I worked a steady 9-to-5'er and he was bouncing all over the place every two weeks... wine, smoke, and a dear friend who happened to also be from Washington got me through that brilliantly.

With GOB's vicious schedule, I have a different approach. Lots of wine, anytime of the day, however much I need. :) I'm thinking wine is the trick for everything, it hasn't failed me yet.

In all seriousness, I'm really glad you don't have to deal with this schedule shift for very long, Circadian rhythms are no fun when whack!

I'm with you on morning, the freshness is unlike any other time of the day. Everything is better in the morning. ;)

I work an 11pm-7am shift now and I haven't slept in weeks (damn summer and its lawn mowers and heat).

It's especially hard to deal with when I get a 2-10pm shift thrown into the mix and have 8 hours to go home, sleep, wake up and go back to work. I just usually end up staying awake for 30 hours when that happens.

I feel much older than I am these days

Everything, Michelle? Yes, I believe you're right.
The army is bad for shiftwork and also for hauling people away from home for days at a time. My dad used to have to go away on manoeuvres all the time, which must have been tough for him, but frankly we kids loved it, as everything was much more relaxed.
I'm really impressed that GOB is able to maintain his gruelling schedule. Poor dude.

Oh you poor thing uglybutterfly! I don't sleep in the summer either, but at least I get my few hours during the night when there are a couple of dark hours anyway and nobody mowing the stupid lawn.
I hope you get a break soon!

hey look! u know how to spell MANOOVER right hahahahaha

the only thing i hate about the shift thing is the late one when aylas home...i dont work those often(i make the schedule haha)...but when shes away i dont mind.
I get used to not getting up early fairly quickly.

Jen, I do not know how to spell manoeuvres - I looked it up. According to Eva, I am being extremely lame when I do that because nobody cares how I spell things. But I care.

It's nice making up the schedule isn't it? I made up my own work schedule as well and have worked it for so long that it is written in stone now. I won't tell you what it is because you would call be a spoiled bitch and you would be right.

I worked in the retail world for some time, and that schedule kind of sucks. My very very brief stint in film production brought about some schedules that weren't too pleasant. I have a bit of a stable one now, so I hope things stay that way. Best of luck though ... complaining is ok - as long as you are so damn witty.

Will, I am going to tell everyone who objects to my complaints that you said it was okay if I did. But trying to be witty may prove to be too exhausting for me, so maybe I'll just stop complaining instead.

I've never worked retail, but know from others that it is absolutely horrid in terms of schedules. And I imagine that film production would inherently have some extremely weird schedules. I'm glad you have some stability now. Routine is highly underrated.

wow - no darkness in summer? I had no idea you were THAT far north. Actually, the best sleep tonic for me is the sight of the morning sun slipping atop the horizon. I'm a natural born night owl and something about night energy turns me into eyes-on-stalks.

Well, PF, I exaggerated - we get about 4.5 - 5 hours of dark at the height of the summer. I am turning into an old lady, in that I can't sleep later anymore (can't stay up late either).