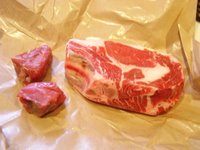 Homicide By Rib Steak
That's what Jerry asked for as a Father's Day supper - a rib steak large enough to contain a complete bone. So that's what he's getting. Eva and I will eat the little tenderloins.
And I am not fucking driving anyone to Emerge tonight. If he has a heart attack, he's got to take an ambulance.
And there is no prize for finishing the whole thing either.
*** 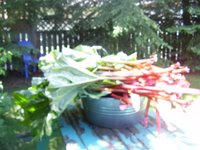 Everything about the day seemed slightly larger than life. I harvested the rhubarb today as well and ended up with 25 cups of rhubarb to add to the several bags I've already got in the freezer from last year.
Anybody want any?
I guess I'll just have to do some baking so that I can put that in the freezer for a year instead.
***
Jer was pretty happy with his Father's Day presents:
* Wilco's Kicking Television (Live in Chicago)
* Red Hot Chili Peppers' Stadium Arcadium
We've been giving the Wilco cd(s) quite a few spins already today. Holy damn, do they ever sound good! I am now starting to get really really excited about seeing Wilco at Mac Hall next week. Jeff Tweedy was completely amazing at the Folk Fest last year, and now we get the whole band. Yippee!!
What is it about Jeff Tweedy's voice that is so heartbreaking? And he's not even trying to break your heart! Get it? I am trying to break your heart? Wilco song title?
Eva says there is an inherent sadness to his voice, and that could be it. There's definitely something about the timbre of it that is very compelling.
Check out: Hell is Chrome - Wilco (Kicking Television)

Posted by Barbara Bruederlin at 5:35 pm

Good company, steak, rhubarb from the garden, a couple of new cd's--
I'll bet Dad felt that it really is his day!

i love rhubarb....mixed with pineapple with a buttermilk crust topping

or pie of course

i love that wilco song

have i mentioned that i've been up for like 22 hours? so i sound like zombie and also like there is no spell check in the world

I hope so, Chuck, and I am happy to report that he survived the eating of the steak as well. Hope your Father's Day was great too.

Dang! You're making me hungry, Kelly! I've never tried rhubarb with pineapple - that sounds awesome. I like it in a crisp with lots of oatmeal topping (large flake oatmeal of course - cause it's all about the oatmeal)

There's nothing wrong with sounding like a zombie, Stephanie. Some of us work hard to achieve that.
Wilco kicks major ass!

That sounds like a pretty beefy steak. I have never seen Wilco live, but I can imagine it is quite an experience. I haven't heard the Kicking Television album in full - but like what I have. It took me a little while, but I got into A Ghost is Born. There is certainly a sadness in his voice, yet maybe also a hint of optimism.

I have a mental image of the Flintstones opening when the ribs cause Fred's car to flip over on its side.

I'll let you know how the concert is, Will.
I'm still exploring A Ghost is Born (but it's Jerry's favourite Wilco album). Personally I love Yankee Hotel Foxtrot and Eva is partial to Being There.
Something for the whole family!

hahaha John - that's exactly what it was like! You should have seen me trying to get that thing home!

That is a lot of meat! Did he really eat all that?

Barbara B., you are starting to scare me.

My family had a HUGE rib thing for supper last night. And for dessert? Rhubarb cake, with cinniman on top. Cause my mum has bags of rhubarb in the freezer.

He wolfed down about 2/3 of it, Barbara W. Which was still about 17 lbs of meat.

It must be a Calgary thing, Hilary. Actually it just might be, because rhubarb is pretty much the only thing that grows here.

Barb, I still remember the rhubarb pie you made....Hmmmmm, bake soem and bringthem to work. I'll happily eatthem all! And freeze them for posterity! :)

good grief...i could barely get a 7oz filet mignon down toinght

Jas, that's not a bad idea. I think I have some pie dough in the freezer, which I also made about a year ago. I'll wait till you are back from holiday, obviously.

Kelly, are you off your feed?