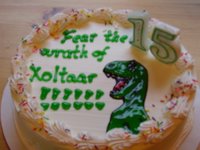 When Eva was wee, I used to throw the most over-the-top birthday parties for her. I would work on them for about a month. I was a stay-at-home mom at the time with too much imagination and not enough money.

I used to make cakes shaped like Bugs Bunny and Sylvester and The Animaniacs, and one year I spent about three nights making a Magic School Bus birthday card and sent it in to YTV so that Patty and Joe could show it on the air and wish Eva a happy birthday. And they did too!

I held elaborate treasure hunts with little plastic dinosaurs buried in the sandbox, and I would get books out of the library to look up party games. That’s how insane I was.

Then over the years, that fell by the wayside. In fact, the first time I used a cake mix Jerry told me that I never have to bake a cake from scratch again. So I never did. Haha I showed him! Now I just get an ice cream cake from Dairy Queen.

Lately, Eva’s birthdays have been pretty low key. This year, she took over - invited a handful of friends over for pizza and cake. Well, okay I ordered the cake and the pizza and made her agree to balloons (which EVERYBODY played with, thank you mom), but it was her show.

Speaking of the cake, when I went to pick it up on Saturday, it was just hopping at DQ. The young feller behind the counter asked me what was written on the cake, so he could locate it and I had to sheepishly tell him: ”Fear the Wrath of Xoltaar!!!!!” He just got the hugest shit-eating grin on his face when he heard that. I think it kinda made his day.

So after lounging about the living room, rolling around in chips crumbs and entertaining Jer and I with stories of the evil gym teacher, these great huge 14 and 15 year olds – all of them smarter and wittier and hipper than I could ever hope to be – started playing Hide-and-Go-Seek. It was such an endearing sight to see these six-foot man-boys trying to stuff themselves into closets, giggling. And then they all went to the playground.

What a great bunch of kids and what a fun party. And they thought up their own games. Go figure.

---
I've got a question for you. If you were a real estate agent with 30 years of experience, and you were trying to sell a house listed at $2,690,000.00, don't you think you would take 5 minutes to proof-read the flyer so that you don't write things like:
"There is 6 bathrooms 5 have been up-dated."
Posted by Barbara Bruederlin at 7:29 pm

wow - that is an awesome cake - I'm glad the kids and especially Eva and her mom had such a lovely, lo-tech time. Sometimes the best games are the simplest.

And, uh, yeah, I'd proofread that or pay a professional. Then again, maybe the owners of the house are colossal dipshits and won't notice anyway...

Isn't that a cool cake, Phlegmfatale? Eva and her friend picked it out when Dairy Queen told us that they couldn't scan the picture of Howard Devoto which she really wanted.
If I were selling my house for the amount of money (never going to happen!) I'd want an agent who could write properly.

That's one wicked cake! I should've played hide-and-seek at my party, that would've been great!
Sounds like Eva had a really great birthday.

did u know DQ will draw a penis on their cakes if u call and ask em all nice??? imagine a penis made of icing? DELIGHTFULLLLLLL

Those sound like some pretty cool parties ... and how awesome that they were playing hide and seek. Rock on.

Who is Xoltaar? And who is Howard Devoto?

chad's not that smart...

I know, right? Hide-and-go-seek never gets old, Hilary. Neither does 20 questions, which they also played.

Dang, Jen, now I wish we'd have thought of a penis cake. I'm sure all Eva's little friends' parents would have loved to hear about that.

Rocking shall continue, Will. Maybe at your next hipster cocktail party, you might want to suggest a game of hide and seek.

Barbara W, Xoltaar is a character of Eva's fevered imagination. But her friend thinks she's spelling it wrong.
Howard Devoto was an original member of the Buzzcocks and then left to start the band Magazine. Eva adores him.

Eva, you are so mean to poor Chad. Just because he listens to Brazilian hair metal...

Cool cake. Made from real dinosaurs I presume?

re: the real estate thingy. Our real estate guy had pictures of our bathroom online with the caption "kitchen" and under the stats he had described our ceilings and walls as carpeted.

Actually, John, I think they used powdered dinosaur mix.
Carpeted ceiling and walls? Wooo, you folks on the rock are kinky!

Being a teen, I know how when you're with a bunch of your friends, with no pressure from school, it's really easy and fun to just let loose and act like a ten year old, again. Sometimes my friends and I go to our old school and play the games we used to. It really fights off the feeling that we're growing up too fast.
Sounds like Eva had a REALLY great birthday! It's always the small parties that are the best!

Yeah, don't be in a hurry to grow up because there's no going back, Becky. Good for you for recognising that.