All the News That's Fit to Rip Off

By now I'm sure you've heard the big story. Because everybody is talking about it, baby!
The Hour is being added to the CBC main network in the fall, in addition to being on CBC Newsworld. Plus there will be a format change to more of a talk show structure, rather than a news-based one. It could make for some interesting debates, both within the confines of the show when it returns in the fall and on the blogs right now.
***
Thom Yorke to Perform on Henry Rollins' TV Show
How cool will this be? Thom Yorke on the Henry Rollins show! 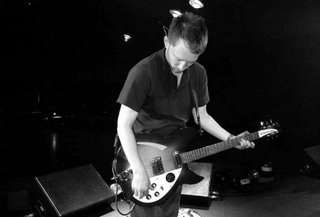 Are you reading this, Jen?
Two of the coolest guys on the planet. I sure wish we got the Independent Film Channel (July 15/06). Hmmm, I shall have to call the cable company...
source: Pitchforkmedia
***
The NME has something new and noteworthy, which I am positive I will be using a great deal - a Morrissey quote generator.
Here's an example:
"All I said was 'bring me the head of Elton John' which would be one instance when meat would not be murder, if it were on a plate."
Oh Morrissey!!!! You bring the LOL into the world!
source: NME
***
The Tokyo Police Club seem to be all over the place these days. Both ChartAttack and Cokemachine Glow are featuring them. I've actually only heard one song, but I've been looking for their EP, A Lesson in Crime, all over the place. Eva's friend's brother is the drummer, which is why I'm following these guys.
***
Apparently, Pete Doherty has run into Jesus during his stay at a Rehab clinic in Portugal. According to Petah, Jesus told him to "sort yourself out, mate". Sounds like something Jesus would say.
source: all over the internet
Posted by Barbara Bruederlin at 11:45 am

That Morrissey quoter made me remember why I love Morrissey so much.

Oh I know, Hilary! Morrissey is the best of the best. Did you read this one:
"I always thought my genitals were the result of some cruel practical joke"

I love that guy!

How out of the loop am I? I didn't even know Henry Rollins had his own show. DOH!

I actually didn't know either, Jeff, until I read about it on pitchforkmedia. Now I'm seriously thinking about getting IFC.

IFC SHOWS SOME GOOD MOVIES YOU DON'T SEE ELSEWHERE AND KEEPS YOU SOMEWHAT ABREAST OF WHAT IS HAPPENING IN THE WORLD OF INDIES. I WISH THEY WOULD SCREEN THE COOL INDIE MY SON AND HIS WIFE MADE. SEE
THE TRAILER @
http://www.wildernesssurvivalforgirls.com

IFC SHOWS SOME GOOD MOVIES YOU DON'T SEE ELSEWHERE AND KEEPS YOU SOMEWHAT ABREAST OF WHAT IS HAPPENING IN THE WORLD OF INDIES. I WISH THEY WOULD SCREEN THE COOL INDIE MY SON AND HIS WIFE MADE. SEE
THE TRAILER @
http://www.wildernesssurvivalforgirls.com

I'm going to check that trailer out, Chuck. I'll give you feedback tomorrow.
And I'm going to look into getting IFC as well.

I have IFC and usually I enjoy it, although some movies just are not good at all. Most of them are alright.

I like how they have commercials of stars saying "Hi, I"m Some Actor and I'm probably watching myself on IFC"

Where are the Cool Movies Go

Hey if all the cool movies go there, Stephanie, it sounds like a place I want to be.

That Morrissey can be punchy. Hopefully, Yorke's performance will turn up on YouTube.

I heard Rollins had a show but ive never seen it sadly....
i should start looking to DL any if they are out there....hehehehe

Oh yeah, UTube's a good bet, Will. And Morrissey makes me laugh so hard that I can't even be mad at him for the seal thing.

I thought of you when I heard about the Henry Rollins show, Jen. Time to investigate that further.