You thought yesterday's picture was scary... 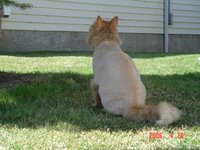 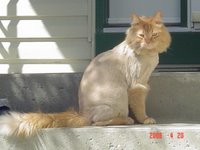 This is Mrs Ritchie's mother-in-law's cat. I'm told it was the nastiest, most anti-social creature you could hope to meet. And then they shaved it, as per Exhibits A and B, above. Mrs R told me that the shaving made a world of difference to this cat's attitude, and I was thinking, well, yeah, it's probably pretty cowed and embarrassed now.
Au contraire, my friends. Apparently it has now morphed into a face-rubbing, mega-purring love monster. Does he not look like he figures he's one pretty fit fellow?
***

Susan Musgrave - poet and wife of bank robber, Stephen Reid versus John K Samson - musician, publisher, and husband of musician, Christine Fellows. Whose judgement would you trust?
If Nelofer Pazira can keep her kindergarten-like bickering antics under control tomorrow, we could have quite the debate. If not, if could be a very interesting pissing war.
Posted by Barbara Bruederlin at 6:32 pm

That cat looks like a miniature lion!!
Must have made big news in the CAT fashion world! He he!

For some reason the second picture of the cat made me think that somehow, if cats really wanted they could rule the world, even shaved like that. And I don't even like cats.

I have never seen a domesticated cat so ready for the African savanna.

We used to have our cat shaved like that sometimes, I always thought the other cats probably made fun of her because she seemed embarrassed, haha.

He looks pretty regal, doesn't he Jas? I just hope Sputnik doesn't see those pictures, or she'll start bugging me to get her shaved.

Allison, you are right. Cats have attitude in spades. They chose not to rule the world because it would be too much work.

He does look like he just polished off a wildebeest, doesn't he, Michelle? How an animal that sleeps 20 hours per day manages to look so fierce is beyond me.

Maureen, you used to shave your cat too? Unlike Marmalade, I'm guessing she didn't think she was hot stuff. I've always had short-haired cats so have never had the opportunity.

Did you see my post after Christmas at
http://phlegmfatale.blogspot.com/2005/12/great-story-i-heard-after-christmas.html
? Sad but funny story about an ultra-mean kitty

No, I haven't seen that yet, Phelgmfatale. I'm looking to reading that - thanks.
Cats can sure have attitude!