Mike Skinner is a cocky little bastard
(I mean that in the nicest possible way of course)
I've never been very fond of hip-hop. With the notable exceptions of a few hip-hop musicians such as Buck 65, K'Naan, K-OS, and maybe the Beastie Boys, I have given the genre a pretty wide berth.
So how was it I ended up buying three the Streets cds on the same day? I suppose it might have been my obsessive-compulsive disorder surfacing, but I'm going to blame Will. The other day Will put a video up on his fabulous New and Used Records site of the Streets' new single When You Wasn't Famous . Well, I ended up spending way too much time going back for yet another listen, because not only was the song insanely catchy, it told a great story.
See, that's the thing about Mike Skinner, aka the Streets. He is an incredibly gifted, yet quirky, storyteller.
So anyway, I was in the music store looking for the new cd. Will had highly recommended the previous release A Grand Don't Come for Free, so I was considering getting that as well. I couldn't find anything, so I asked the lads working there, and when they found it for me, I told them I was thinking of getting a previous cd as well. They almost fell over themselves in glee. "Original Pirate Material!!!" they both squealed simultaneously. "Um, actually, I was thinking of A Grand Don't Come For Free" I replied. "Oh that one's really good too", they gushed, "but OPM!!! OMG!!!"
What could I do? How could I turn down a recommendation like that? So I bought them all.

The album Original Pirate Material, with its breakthrough hit Has It Come to This, was heralded as a saviour of UK Garage music, and was critically acclaimed, including a nomination for a Mercury prize.

But it was with A Grand Don't Come for Free, that Skinner's storyteller really came into its own. The cd is essentially a concept album, starting with the story of Skinner losing a thousand pounds, going through relationship problems, and finding the money again. It was the stories (sorry, songs) on this cd which led to Mike Skinner being described as "a thinking person's soccer hooligan". The songs are all highly personal: hanging with sometimes untrustworthy mates, being intimidated by a beautiful woman, forgetting to return the rented dvd on time. Tedious stuff of all of our tedious lives, told in the most compelling manner. 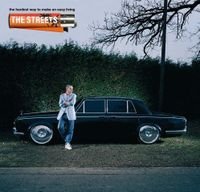 The Hardest Way to Make an Easy Living continues this style of highly personal narrative, but from a post-fame perspective. Fame which has not always been kind to Mike Skinner. But instead of whining about poor me, I just need my space from the paparazzi, Skinner brilliantly turns the tabloid tales about himself to his advantage. When You Wasn't Famous tells the story of shagging a famous (and famously unnamed) personality. Hotel Expressionism deals with trashing hotel rooms as an art form, while the title track gripes about the financial pitfalls of being a pop star. But what I think is perhaps the cleverest example of Mike Skinner's ability to capitalize on his boorish behaviour comes on Fake Streets Hats. This tells the story of the infamous concert in Amsterdam, where he showed up late and blitzed and proceeded to harangue the audience for wearing "shit-hole fucking fake Streets hats", only to find out later that they were in fact real Streets hats, given out as promotional material. I can't think of anyone else who could handle an embarrassing situation like this and turn it into a compelling song. He is not afraid to look like a fool. Actually he seems to encourage it.
Tracks like Can't Con an Honest John and Two Nations are riveting lessons in how to pull off a con job and the differences between the UK and the US.
The track that really floored me, though, was Never Went to Church, in which Skinner talks to his recently deceased dad. It's a far cry from the sassiness of the other tracks, it's heartfelt and surprisingly moving. I was astonished to find myself misty-eyed while listening to it as I drove to work. Now, I'm a crusty old thing; I don't cry for nobody. But I cried for Mike Skinner.
Should you buy The Hardest Way to Make an Easy Living? Hell yeah. Why not buy all three?
Posted by Barbara Bruederlin at 2:12 pm

Excellent. excellent review Barbara. Nothing wrong with picking up all three ... this makes me anticipate the record more - as I think I still have to wait a week and a half. He is quite the storyteller - funny, charming and compelling, and absolutely one of my favorites. Glad you're a fan.

Record store clerks are so damn cute when their interests are piqued!

Most well-done review once again dear Barbara. You gotta start that magazine I tell ya...

Thank you, Will. And thank you for your astute recommendations. There is nothing finer than dicovering new music. I am indeed a fan.
You have to wait another week and a half for the record? Qu'ell drag! Check your email, my dear.

It was a really cute sight, Michelle. They got all giddy, I thought they were going to pee themselves. Certainly better than the HMV clerk who claimed Eva was making up the band name when she asked about the Buzzcocks! What's he doing working in a record store if he's never heard of the Buzzcocks?
As for the magazine, in my mind I'm already writing the first edition (but that's probably where it will remain).

Just wanted to say that I enjoy reading your blog, always very insightful :) Also, excellent review. I feel the same way about The Streets.

Well, thank you Barbara ... much appreciated. Enjoy the other two ... some of my favorites include "Has it come to this," "It's Too Late," "Dry Your Eyes" and "Blinded by the Lights."

I took a quick listen. But I can't afford to like a whole other genre now. I would need to get my english to UK dictionary for some of those songs.

Thanks Allison! And welcome! You're linked on the Hour blogtracker as well aren't you? I believe you did a piece on the Panel Van, didn't you?
The Streets is pretty great. I'm happy to have yet another new obsession.

You're welcome, Will. I'm still discovering the first two cds as I have't listened to them 387,987 times yet, like I have THWTMAEL. So far I am quite taken by It Was Supposed To Be So Easy.

It is catchy music but I won't let cute record store clerks talk me into anything my wallet is not ready for. They can talk me into going out for coffee. We'll see how that goes. Tsk. Too young for me? Where was I going with this?
I blame the cold medication!

I have one Streets song in my collection, which is Don't Mug Yourself, and I got so addicted to it when it was sent to me that I am compelled to search out more. This only heightens my curiosity.

Oh Barbara W, cute record store clerks are no reason to buy cds you don't want. What if it were a cute Lexus salesman?

Hey Ruhee, it is really addictive music, isn't it? Darn that curiousity anyway!

That reminds me did I ever tell you about the hot used car salesman that asked me out for coffee? He was a cyclist in his spare time and man was he fit. I was only in to get my car serviced I was not ready for 'coffee' at that time.
Maybe I should get my car checked out again soon.
naaa
lol
I am so off topic!

Barbara W, you need to always be coffee-ready. Except if you just finished exercising and haven't had a shower yet or something. Or if you don't feel like "coffee". But don't buy a used car just cause he's cute!