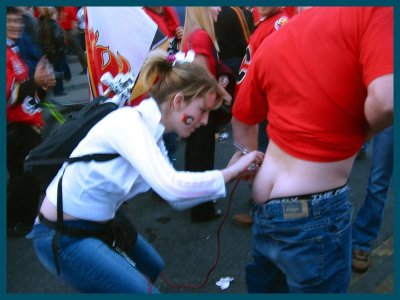 I guess we'll party like it's 2004
We were driving home, shell-shocked, from the accountant's last night (we owe how much in taxes?), when we passed a gaggle of adolescent boys on the boulevard in front of the school. They were all decked out in their Calgary Flames paraphernalia and waving a huge Canadian flag and were hopping up and down and doing little hockey fan dances. When we gave them a little thumbs-up toot on the horn, one of them flashed us his scrawny little chest. I think they've spent some time down on the infamous Red Mile during the 2004 playoffs. They looked like they were auditioning for another edition of Girls Gone Wild.
So, hockey playoff fever has swept Calgary again, in a big hurry this time. In 2004, it took a while for the momentum to build. The Flames were not expected to go very far in the playoffs and their Cinderella story charmed everyone. We used to be able to hear the horns honking all over the city whenever the Flames scored. It was actually pretty damn fun.
This year, of course, the expectations upon them are pretty intense.
The city police are cracking down on festivities on the Red Mile (aka 17th Avenue), as there was a lot of debauchery and public urination last time. There are a lot of bars and restaurants down there that do exceedingly well during the playoffs, but most businesses only suffer the damages of vandals and people pissing in their doorways. As one shop owner explained, "drunken hockey fans do not buy a lot of carpets". 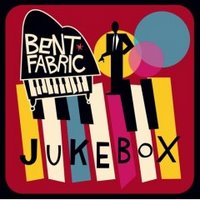 -----------
I heard something really heartening today. Have you heard of Bent Fabric, the Danish musician? He's 81 years old and he just released a new album, Jukebox. I heard a cut on the radio today and it's really catchy. It's a mix of house, electronica, jazz. There are a bunch of other musicians lending their voices to it, so it doesn't sound like an 81 year old man doing dance tunes.
It gives me hope for the longevity of my own love of new music, and also makes me feel slightly less pervy for hanging around with the youngsters.
Posted by Barbara Bruederlin at 3:11 pm

What is she doing to that guy exactly?

Barbara W, she's either painting a Flames insignia on his bum or shaving it. Hard to tell from here.

Bent Fabric? The guy is still around? Is the is same pianist that recorded "Alley Cat" in the sixties?

"Bent Fabric" is a pretty cool name, but for a while he went by a one-word name: Rumple.

I need to be a Canadian hockey fan so strangers will draw on my ass, too...

wow - bent fabric sounds like my kinda stuff! Will run right out and try to find it today. Thanks for the heads up! Oh, and sorry about the tax thing - we owed mightily this year too, and it were muy painfuloso.

GOB, that is indeed the same Bent Fabric of Alley Cat fame. How you know so much about the most esoteric things continues to boggle my mind! "Rumple" certainly has more flair than "Cher".

Michelle, I think we can easily arrange both of those things for you...
You just need to throw around words like "icing" and "blue line" - you don't need to know what they mean - and make your bum readily accessible.

Phlegmfatale, I only heard one track (which I liked) so I hope I'm not leading you down the garden path somewhere you would rather not be.
We thought we were prepared for the tax sticker shock this year, but we waaay underestimated. Still, it's nice to have someone to commiserate with...

I think I keep coming over to your blog to see that cute little bum.
Sorry to hear about your tax thingy. You need to be poor like me so you can get a refund like me. It's pays to be poor!
Not very much mind you...

I turn to your blog and what do I get? FULL MOON! Bent Fabric sounds quite good, though. I'm excited to check that out.

I actually do get a refund, Barbara W, but it was completely wiped out and then some (a lot more some) by Jerry's negative refund. It pays to be poor if you have a sugar daddy.

I'll bet you're just happy they didn't have a different camera angle on that pic, Will. Always like to keep you guys on your toes...

You are fantastic, Will! Thanks! I buying this for sure.