I Could Have It So Much Better 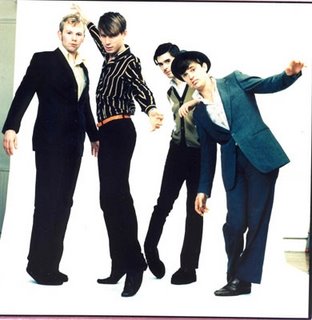 Guess where I'm not going tonight. You've got it: I'm not going to the Franz Ferdinand / Death Cab for Cutie concert. I obviously need to work on my reflexes, as my internet finger is not yet up to lightning speed. When concerts sell out in minutes, you've got to be in top shape to compete with the youngsters who have been computing all their lives.
What a good show this should be, too. I'm very fond of Franz Ferdinand. Despite the Russian constructivist art on the cover of their latest cd, they make no pretensions about being a high concept band. They simply make fun, catchy music that girls can dance to.
I was so relieved when You Could Have It So Much Better turned out to be as great as it did, because I always get terribly nervous about the sophomore release from a band I admire. All the press about so much of their material being trashed and rewritten didn't help relieve my fears either. But no need to have fretted. I actually rate it higher than their debut cd.
Death Cab for Cutie will be an interesting match-up for the tour, as well. While I can't listen to too much DCFC in one sitting (too much moodiness, too much introspection), I do like them quite a lot.
If you are going to the concert tonight, have fun (you ticket-stealing bastard)!
***
Chances are I wouldn't be going even if I did have a ticket, as poor Eva is still sick. She actually started coughing up blood this morning, so I'm taking her to the clinic.
health update: She's not dead yet, but she'll be home the rest of the week, as this bronchial thing is still infectious (yay, I get to spend more time around Typhoid Mary). The elephant tranquilizer-sized pills (30 of them) were a big hit. The fever must have cooked her brains, because she laughed her head off for 10 minutes when she saw them. PLUS she's excused from running in gym class for the next 10 days via a doctor's note (she made sure we didn't leave the clinic without scoring that first).
Posted by Barbara Bruederlin at 7:40 am

awwww, sorry you don't get to go to your show. Bummer.

I literally let out a gasp when I read your blog. You might hate me, temporarily or forver. I had presale to that!:( I'm sorry! Next time theres something that might interest you, I PROMISE, I'll let you know

Just dropping by and I didn't know my blog is linked on The Hour's website.
I was wondering why I got a few comments from the entry I wrote from Easter Monday. :)

To Those Who Annoy Me said...

awww...Tell Eva I feel for her! But great job scorin the doc's note for gym class...a must in any non-jock teenager's repetoire.
TIP: Eva, if your gym teacher is male, I find that confusing them with a lot of technical jargon about your "female problems" works too!

Thanks, Phlegmfatale. I can't compain too much as we have been to a tonne of shows this winter. But I'm always a hog for more...

Monica, I could never hate you, although I'm trying really hard right now. kidding! How did you get presale, you lucky duck? I assume you aren't going?

Thanks Barbara W - I will let the Sick One know you sent kind thoughts.

Hi Lenny, welcome. And welcome to the Hour blogtracker membership drive. Actually being on the blog tracker is a great way to meet some new folks - I've met some great ones that way.

haha Jamie, I knew you could really appreciate Eva's foresight in making sure she got the most out of this doctor visit. Gym teachers are way too easy to manipulate.

Hey, I just wanted to stop by and thank you for leaving the comment on my site. There definitely could be worse ways to die, like NOT having George on tv during the process, lol...

And according to your profile, you've got a spectacular taste in music, it's always good to find more Matt Good fans, the man's a lyrical genius! Did you happen to catch him on his acoustic tour this time around? It was incredible!

Again, thanks for leaving the comment, I appreciate it. :)

Hi universalantidote-x, welcome! You are preaching to the choir here, not having George on tv would be a slow and very painful way to die.

Yay, another Matt Good fan! I did see his acoustic show and was completely blown away (again). Matt's a big hero of mine and I've been bugging the Hour to have him on the show forever, so was really glad when George finally took him to the newsstand a while back.

Damn ... guess you have to be quick. My apologies, though. Hopefully you get to see some other good stuff.

I do get to see some other good stuff, Will. I'm really chuffed about the Constantines in May and just heard that Wilco is coming in June. Yay!!!!!

Yeah, I see the Constantines are heading this way as well. Shamefully have never seen Wilco live.

The Constantines seem to tour endlessly, Will. They must love it or something because they sure can't be making any money for the insanely low ticket prices they charge. They are superb live. If you have any inclination to see them, DO.
I've not see Wilco either, but Jeff Tweedy played the folk fest here last summer and he was grand.

Argh, my post from the other night didn't go up. Really, I wished Eva lots of good stuff in her healing!!!

I hope your precious itto sweetie pie gets better soon, Barbara. She'd probably be a little upset if she read that, wouldn't she?

hahaha Michelle, I showed her what you wrote and she laughed her head off. She's been laughing far too much lately. Missing a week of school is too much fun, methinks.
Thanks for the good wishes, hon.

True, you can see a million shows, and it's never enough, is it?

Live shows really do get addictive, Phlegmfatale. I'd happily go to one every two weeks. I have to pace myself now, with my advanced age.

Wonderful and informative web site. I used information from that site its great. » »