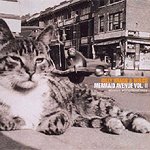 Look what I found at the library the other day: Mermaid Avenue Volume II by Billy Bragg and Wilco. I’ve been listening to it a lot.

A few years ago, Billy Bragg was approached by Woody Guthrie’s daughter. Her father had left behind a lot of lyrics when he died of Huntington’s disease and she was looking for someone who would honour his vision by putting those lyrics to music.

So together with Jeff Tweedy of Wilco, Bragg set about to put these words to music and the result was Mermaid Avenue Volumes I and II. It’s pretty astonishing. Not all of the songs are perfect, but there are many that are. Airline to Heaven, My Flying Saucer, Stetson Kennedy, Remember the Mountain Bed, All You Fascists, and Some Day Some Morning Sometime all pay homage to the legacy of Woody Guthrie by maintaining the power of the words the Guthrie penned, while making them more poignant with great music. This is music that transcends the decades; these lyrics were all written between 1939 and 1955, and yet they remain so vital and relevant today, even the political songs. Not all that much has really changed, after all.
I remember hearing Bill Bragg being interviewed on CBC radio shortly after he and Jeff Tweedy finished recording this. I’m so glad this has now come to my attention on a random trip to the library. I’m definitely looking for Volume I.

The other cd I picked up at the library was Odditorium or Warlords of Mars by the Dandy Warhols. It’s not a terrific cd, actually. It lacks focus, with some of the tracks being pretty cool, while others seem to be a strange hybrid of country and... I don’t know… space ship music.
But it did remind me of the wild feud between Courtney Taylor of the Dandy Warhols and Anton Newsome of the Brian Jonestown Massacre.

Now, I’m a sucker for a good feud, and the music industry seems to be particularly fertile fodder in which to foment antagonism. Who can forget these legendary inter-band hostilities:

And what about those unforgettable feuds between bands:

The feud between the Dandy Warhols and the Brian Jonestown Massacre is documented in an enlightening Sundance-winning film called DIG! Oddly enough, it is narrated by Courtney Taylor. It chronicles the initial fast friendship between the bands, the mentoring of the Dandy Warhols by the Brain Jonestown Massacre, and the inevitable rapid downward spiral into increasingly vicious fights, and ultimately death threats, fuelled by Anton Newsome’s schizophrenia.

The Dandy Warhols went on to enjoy considerable commercial success in Europe, while the BJM, although heralded as one of the most distinctive and influential bands of its time, all but self-destructed as Newsome’s messianic delusions led to him attack band mates and audience members with microphone stands and his boots.

All in all, DIG! is a fascinating film about music industry feuds and egos gone ballistic.

See? Your local branch of the public library is a treasure trove of information. Go now, go often.

Posted by Barbara Bruederlin at 7:26 pm

First things first - you're right; all of a sudden the public library became THE PLACE to find good music. It's awesome. And, yeah, who doesn't love a good feud. My personal favorite would have to be John vs. Paul. "How Do You Sleep" wrote the book for these rappers and there "diss tracks."

I have to agree with Courtney Love vs. The World. Part of me feels really sorry for her.

Holy crap Barbara, I go on blogging hiatus and I'm so far out of the loop I'm lost. ;) You still rock my world girl.

And who can forget Sloan vs Matt Good? OK, that wasn't as huge as the general band feudy thing, but they didn't so much get along. Chris Murphy was asked what were the high and low points of his career and in a possibly rare moment of tact (I kid, I kid, sorry Murphy) said "Playing on Conan O'Brien and playing with Matthew Good. You decide which is which."

There was a lot of drama.

Anyway, I just called your house to talk to Eva, and realised afterwards I hadn't really said hello to you. Sorry. :(

What about Matt Good vs. Our Lady Peace

or even better:
Matt Good vs. Nickelback

I agree totally on your Dandy Warhols comment. That album is uneven, nowhere near as good as "13 tales from urban bohemia".

You forgot the David St. Hubbins versus Nigel Tufnel feud.

I'd have loved to have been in the audience when the Everly brothers had a fight on stage too.

It's bugging me now, Courtney asked a young British Rock star for a date recently, and he rejected her approach and I can't for the life of me remember who it was.

The Library always had a certain budget for new music when I worked there in highschool, the problem being they always get ripped off.

I have rediscovered them for movies and saving some money.

My Mother borrows cds and dvds from the library all the time. I had no idea she was being trendy.
Maybe I should take a second look at the libraries collection.

It has become apparant that there are SO many great feuds that I haven't mentioned and you all, you wise folks, have filled in the gaps beautifully.

Will, I just thought it was my local library that suddenly had some kick-ass music available. It's great to know that it's more widespread than just the Fish Creek Park branch.
And oh yeah, John vs Paul - that one set the bar, you're right.

Michelle, welcome back, baby! You guys should get Courtney Love over for supper sometime. She still maintains ties in your parts, I assume? Just keep her away from the medicine cabinet.

Ruhee, your knowledge of all things Sloan continues to gobsmack me. I didn't know that Chris thought so highly of Matt! hahaha Matt Good, curmugeon? nah!
No worries on the phone call - have fun at the film today.

Stephanie, you are right, Matty vs the world, pretty much. The Nickelback spat in particular was a classic, but I didn't want it to appear that I was picking on one person. But I guess if the facts warrant...

Ben, Spinal Tap - I totally forgot about that - good call.
I don't know the Everly brothers story. I'd love to hear it sometime. Nothing like a good onstage brawl! Double the entertainment.
Somewhere in the back of my foggy mind, I recall Courtney Love being rejected as well, but can't recall whom it was either. Not Pete Doherty, was it? It's a tough life, being a cougar.

Jacquie - I was wondering where the library cds came from. I didn't think they were purchased new because they look so banged up, but I guess they pass through a lot of hands.

Barbara W, I didn't know your mom and I were being trendy either. Now I'm strutting about being a trend-setter.

but then again, Oasis seems to have many enemies...expect Arctic Monkeys...

but then again, Oasis seems to have many enemies...expect Arctic Monkeys...

And one time, Paul Anka got drunk and kicked out all the sound at a show, and Buddy Holly was so pissed, that he started cussing, but as he did, all the sound was back up and running, so everybody heard him. I read a few stories about Buddy in my youth that kinda ruined that clean-cut image. (I don't think the two feuded, but this blog made me think of that).

OK Barbara B. I just heard that I won 10 songs from The National Playlist... Now I need to make some choices. You are the person to consult 'bout that.

Sean, right you are - Oasis collects enemies, but yeah they seem to like the Arctic Monkeys. And Noel seems quite keen on Charlotte Church. !?! His exact words: "she fookin' 'as it!"

Yay Will! Onstage boorishness stories! I'm thinking the Buddy Holly clean-cut image was likely manufactured. Hard to live up to that in real life.

Hey hey, Barbara W, I just heard you won the itunes card! Aren't you getting to be famous on National Playlist? Good stuff. (I think Jian LIKES you!)
Suggestions, you say. Well, I'm not too sure what you have already and what kind of music you like, but I'll email you some suggestions tonight. Congrats!

HAH! I thought you just wrote that Courtney Love still had ties in Michelle's pants! I started to think there was a really good story behind that one!

hahaha Jeff, you kill me. That would be a really good rumour to start.

There's one thing we don't have out in the boonies, good music and vids at the library, lol. But did I mention I live right by the water in the country??? ;)

Holy shit, I can't believe you caught Jeff and I making stuff up about you, Michelle.
*big shit-eating grin on my face*

Oh sure, rub it in, Maureen. You have reality that doesn't suck, is that what you are saying? Actually, it sounds pretty fantastic.

It's people like you that give me a bad reputation! I am pure. Really, I am.

Michelle, I'll let you have the last word on this, but bear in mind I have written record of it.

I LOVE Dig! It's a very raw, enlightening film. It's amazing to see these ostensibly grown-up men grapple with a jr. high social breakdwon. Of course, the dissolution of the friendship was much drug/psychosis-generated, but it's fascinating to watch. Love a few songs by TDWs. Odd coincidence - I listened to Bohemian Like You about 10 times last night, and You were the last high. In their occasional flashes of brilliance, TDWs are breathtaking.

Oh, and I've gotten my Neko Case tickets - I can't believe how many are still available - I hope the show sells out, though - she's amazing. I'll be keeping an eye on it.

Phlegfatale, I think you described DIG! perfectly with the word "raw". At times it's almost painful to watch. Fascinating though. Another favourite music film of mine is 24 Hour Party People, about the Manchester scene and the story of Factory records.

I'm so happy for you that you got Neko Case tickets. People are going to be kicking themselves in the ass if they don't take the chance to see her. I just found out she's going to be at the folk festival in my old home town this year (not in my current place) - RATS!

Feist is coming to the folk festival this year though - here.

Right you are, Ruhee. Feist, and Ani De Franco and Dar Williams - some pretty cool women will be at the folk fest.

Rewriting History 2.0: somewhere in here, there is a thing about Sloan and Matt. I know it is there. Ctrl+F is a good friend.

I didn't realise Dar Williams was coming too! Oh dear. I'll have to try. I don't think I will have any money left come July :\

Thanks for the link, Ruhee - I will check out Chris dissing Matt - such fun!

You may have to try the Cartman technique of getting something from your parents (to get cash for the folk fest):
"but, mooooooooooommmmmmm!!!!"

Hahaha! That is true. My dad is a fan of Feist though (I bought Let it Die for him in January) so perhaps I won't even have to worry about that, since if he wants to see her, I will tag along. :)

Good plan, Ruhee - get the parents hooked on your music and you are laughing. Hey, is that what Eva did?