Matthew Good once again has my undying love

Well, I guess he always did have it, but for a while it kind of got pushed to the back burner and taken for granted while I was busy with more current infatuations. You know, kind of like marriage. But last night, Matt put on a fabulous show and stole my heart and mind right back again.

This was the third time I've been to one of his shows, and I have never seen him so relaxed and jovial. The fact that it was an acoustic show, with cabaret seating, certainly helped make it a more laid back atmosphere. No mosh pit, nobody hucking shoes, no bandmates to get on Matt's nerves. As Jerry pointed out, it's like he's been waiting all week for you to arrive at his house and now he's got you in his living room and wants to play a few songs for you on his guitar and read you some passages from this hilarious book he's been reading.

If you know Matt at all, you know that he can be pretty intense. And if you've ever visited his blog, you'll have experienced the power of his awesome intellect. The fact that he can be scary smart never got in the way of his welcoming us lesser minds to discuss human rights, geopolitics, or the environment, because he's got enormous compassion for people as well, and a wicked sharp sense of humour to boot.

Last night all the humour was there, with none of the righteous indignation. In contrast to his usual practice of spewing some hard-hitting political rants between songs, last night Matt kept his few political observations short and pithy. Instead we got the comedic stylings of Matthew Good. He had with him a book he is currently enjoying, The Worst-Case Scenario Survival Guide (you may have seen it around), and dipped into it from time to time with observations on the instructions for stopping a runaway locomotive, say, or what to do if your parachute doesn't open. Great stuff. Wish you had been there. Who knew that Matt Good, famous for being difficult and unforgiving to fools, could be so laid back?

And then of course there was the music.

I started keeping track of the playlist, but lost count. Included were acoustic versions of Alert Status Red, Empty Road, In a World Called Catastrophe, Black Helicopter, Avalanche, Generation X-Wing, Load Me Up, Apparitions, Been a While Since I Was Your Man, Prime Time Deliverance, Tripoli, Indestructible, and, just for me, Strange Days. With nothing but a guitar and his voice he kept us mesmerized for almost two hours. And an eight-song encore! It's like they couldn't get him to go home!

I think Matt could be on to a very good thing here. He doesn't need the trappings of a rock show to reach people. He can stand up in a room full of people, looking slightly geeky with his glasses and his hair in slight need of a trim and his baggy-assed jeans that look like he's been wearing them all week and that english professor geek jacket and completely slay everybody. 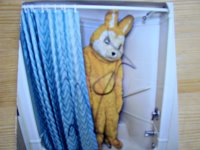 Update: Tydes has an excellent review of the Edmonton show. Check it out.

Posted by Barbara Bruederlin at 8:07 pm

only 9 days til the london show! i cant wait!

Hi Baron, welcome! London, eh? My old stomping grounds.
You are in for a huge treat - Matt is really in his element at an acoustic show. I wish I could go again.

haha Rob, you got me - changed your id again, did you? That's a long way to go for a show, but it will be worth every kilometre.

Teddy said...
This comment has been removed by a blog administrator.
11:17 pm

Read my blog entry to see what I'm going to do about it.

Been A While Since I Was Your Man? My favourite. Generation X Wing?!?! OMFG

Glad you had a great time Barbara.It's a great feeling when you come back from a top show. The buzz carries on for a couple of days after.

Glad you enjoyed it though, Barbara. I'm glad he's back at the top of your musical infatuation list. :)

Last night's Edmonton show absolutely levelled me. I think the guy could probably do another round of tours of just acoustic shows and he'd fill each seat every time. The guy is simply amazing. Those tickets represent some of the best money I've ever spent.

I looked in my music collection and did not find Matthew Good there.
If I had to buy a CD of his, what one would that be?
Don't you just love the floaty feeling after a good concert?

So you're flying to Ontario to catch the show, Teddy? That man does inspire dedication, doesn't he?
But, yes, he played a lot of stuff that he doesn't normally do at concerts. It was great to hear songs like generation x-wing.

Ben, the buzz is still going strong, but oddly enough, there's no buzzing in my ears. Another plus for acoustic shows!

Aww Neil. I'm still mad that you are being ignored out in the Maritimes. It's not really that much farther than Montreal; I mean there are planes.
Wish you could have been at the Calgary show with us.

J, I could not agree more. I'd go again tomorrow if I could. MG just keeps getter stronger and better, as far as I'm concerned.

Barbara W - ahhhh tough question, there are so many great ones. But I would say Beautiful Midnight (which is actually Matthew Good Band) is a must have, as is Avalanche (no band). In a Coma (2cds and a dvd) has acoustic versions of some of his older songs as well as b-sides and lots of videos. S'great.
You know what, I'll send you a couple of samples to get you started.

Shocking news! The National Playlist is going to end after next week!
I just heard the news from Jian today.
*shakes her head sadly*

Thanks for the music Barbara B. I hope it can cheer me up. :-(

I know barbara w - I just heard too. We'll have to have a wake or a going away party or something. Jian can bring nanaimo bars.

Barbara #2. I love Beautiful Midnight Album as well (My 2nd Fav) but I think that Avalanche is the ablum that he will never top again. You should defenitely get Avalanche... but this isn't my blog so maybe you'll have to listen to Barbara #1 on this one.

Neil sweetheart, my blog is your blog. And you are right - it would be very tough to top Avalanche - I still love it more and more with each listen. Barbara W should get both!

I will start with buying Avalanche. It will give me an excuse to go flirt in the record store. Then I have an a second opportunity a month later or when my budget allows to go back to buy Beautiful Midnight and flirt some more. See! I girl who can plan a budget.

Jas B said...
This comment has been removed by a blog administrator.
11:05 am

I love his geeky looks. And of course his voice, his music, his blog (everything thanks to you, Barb).

He reminds me of a very good friend who lives back home in India.

Barbara W - your budget and flirting plans are second to none. Brava.

yay, tomorrow night he will be here in Saskatoon. Unfortunately, it will be at Louis, sans seats....sigh looks like I am going to have to elbow alot of people so I can get down front....

Sean, you are really going to love the acoustic show, I think. No seating? It was actually really nice to have seats and a table with a little tealight on it. It really added to the intimacy.

Sharpen your elbows, my man! Have a great time at the show.

I'm starting to think I should have gone to that instead of the rock show we saw in November! Not that I didn't enjoy the latter, but I imagine I would have had more fun at this. Good to hear Matt can do acoustic (when I saw the adverts I was like "What the hell, angry Matt Good? This is going to be a disaster"). Nice to know it wasn't.

It was great Ruhee, wish you could have gone (except that it was +18 and they were checking ID - hey, they didn't check mine! wtf?)
Matt was definitely in his element.

every show ive been to of Mg's has only had ONE thing that disappoints me...thats the crowd...
the defending my face mosh pit, having my glasses kicked off my head etc...bc drunk fuckwads like his old rocking tunes but boo and hiss when the cool acoustic ones come on...im excited to see MG play without the super mosh asswipe factor...dont get me wrong, ive done my share of moshing in my day but...IM OLD NOW and its MATT GOOD for fucks sake lol

I'm jealous that you got Black Helicopter.

Jen, you are going to love the acoustic show. People were definitely better behaved. Aww, you got the odd fool yelling out Rico, but the atmosphere is completely different than at past shows.

Stephanie - I am a fool. It was actually Can't Get Shot in the Back. I got mixed up.

I need to just sit down and listen to Matt for a few hours (and do nothing else), then maybe catch a live show. Thanks for the rec.

I'm glad I could return the favour Will. You are always so good at making recommendations. Matty is sure worth spending a few quality hours with.