How many dead guys would you have in your dream band?
I'd have two. Plus a fictional character.
I was listening to Bloc Party the other day, grooving to Matt Tong's awesome drum

ming, and I thought, "I'd recruit him to be my drummer if I were ever to put together a rock band." Which naturally made me start thinking about who else would be in my dream rock band.
Here's who I came up with for my dream team:

Frontman: I'd have two, because I'm greedy that way: Stuart Murdoch (Belle and Sebastian) and Bry Webb (Constantines).

e Righteous Howler stuff. And then to make things really interesting, they could do the odd duet.

Songwriter: John K Samson (the Weakerthans). The man is one of the

greatest poets in rock, possibly with the exception of Leonard Cohen, but Samson writes really really catchy tunes as well, while Cohen's are rather funeral dirge-like. (Plus, maybe we can get John's wife, Christine Fellows, to join us for some concerts - she's awesome too).

Drums: Matt Tong (Bloc Party), as already mentioned. That guy makes me want to be a drummer. Unleashed, militaristic rhythms - he makes it seem so easy.

Electric Guitar: Billy Talent from Hard Core Logo. Maybe not the best guitarist in the world, but what an interesting character! I don't care that he has a pop-punk band named after him. Who else could make Hugh Dillon shoot himself in the head? 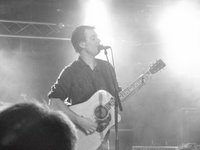 Acoustic Guitar: Matthew Good. After this week's acoustic show, I maintain that nobody can play the hell out of an acoustic guitar like Matty can. Plus I see possibilities for dramarama when he clashes with the other guitarist in the band. Cause we all need some more drama in our lives.

Bass: Meegee (Limblifter). She's so cute and little - her bass is way bigger than she is.

Horn Section: Louis Prima and Chet Baker. They were so outstanding that they have to be in my band, even being dead.

Violin: Owen Pallet (Final Fantasy). Not only a great violinist, but he's also a cutie a

nd has a great fringe.

Piano: Rufus Wainwright. Best sideburns in rock, sassy, and a great piano god. Makes me wish I were a gay man.

Go Go Dancers: I really want them to sing as well, of course, but I have to give them an official job that isn't already spoken for, and they are both sassy and wildly interpretive dancers - so Thom Yorke (Radiohead) and Morrissey (the Smiths) will dance for your enjoyment.

Cowbells and Tambourine: Me. Hey, it's my band; I get to play, too!

Frontwoman: Just realized that there is a dearth of women in this band. We can't have that, not when there are so many talented women in rock, so we'll add a couple of frontwomen for those boy-girl vocals and to add some much-needed progesterone to the mix. Neko Case (New Pornographers) - for obvious reasons - one of the most recognizable female vocals in rock and alt country with that outrageously powerful voice. Second female lead - in keeping with the example set by the boys of using polar opposites in sounds - Poly Styrene (X-Ray Specs) - another immediately recognizable voice, one that could melt paint off the wall.

We'd better stop there. This band is getting bigger than Polyphonic Spree. We wouldn't want anybody to get pushed off stage or anything, because then I'd have to call in my public relations spokesperson, Noel Gallagher (Oasis), with his diplomatic prowess to set things right. Can you imagine anything better than having Noel Gallagher as your spokesperson?

So those are my picks. Imagine there was a football pool going on at your office, only it was for the battle of the bands. Who would you pick for your dream team?

Posted by Barbara Bruederlin at 4:48 pm

wow you seem to have put a lot of thought into this.
it sounds like your band would be too kickass for this world

wow, great post - I'm going to have to think. the only person I know for sure would be Layne Staley as front, so there's one dead guy already.

Great band Barbara, and you're right, Matt Tong is one of the most exciting drummers around at the moment.

But Thom Yorke dancing is a little like a frog in a blender.

I would froma duet with one man, my idol, Joe Strummer.

What a great post. Yeah, the band got big but, hey, they could be like the New Pornographers - not everyone has to play on every track.

Well, the thing is, Stephanie, I have a really long commute to work, so rather than waste my time solving the world's problem, I do shit like make up bands.
And of course, now there's about 15 more people I want to add...

Maureen, I'm sure he could keep you entertained with stories from his tortured life in between sets. There's a pile of dead guys in rock these days.

Rob, going for the classics. Nice move. Maybe a little instrument smashing after the show?

Oh Ben, I miss Joe Strummer. I don't know why I didn't put him in my band! That would be an awesome duet. Did you ever see the film Let's Rock Again by Dick Rude, about Strummer's last tour with the Mescaleros? It'll make you laugh and cry.
Nothing wrong with a little frog in a blender dancing, I say. I could have gone with Ian Curtis. (Maybe I should)

They could be a big old Canadian-style collective, Will, you're right. I can add more people! We'd just need a big stage - no room for an audience!

That question is way over my head.
I heard a Medium say that Elvis still does concerts in heaven. I have even seen people who claim to channel John Lennon. But bringing people back from the dead to do a concert... ah Why not?

Sure why not? If we can put fictional characters in our bands it should be easy peasy to use dead guys!

Animal from the Muppet show!

I hear he's a hell of a drummer.

I've been trying to think of mine. One of my friends was asked at his audition what his dream jazz band would look like, so I've been working on that too. TOUGH STUFF, holy mackerel, on both of them! I'll get back to you :P

Thank you, Ruhee! And congratulations on getting into York! woohooo!!!!!! Look out Toronto!
Can I expect at least one Sloan member in your rock band?

Looking for information and found it at this great site... » » »