Happiness in the News
Every now and then, the newspapers have headlines that focus on the positive. Here are some headlines which pleased me today:

This actually made front page headlines in the Calgary Herald, and that's as it should be, as this bear has a tenuous grip on survival. The Alberta government has cancelled the grizzly hunt for the first time ever with a three-year moratorium. They admit they have no reliable estimate of grizzly numbers in Alberta.

From the Books and the Arts section, the happy news that Lynn Coady has published another book. After reading her book of short stories, Play the Monster Blind, I gobbled up, in rapid succession, her novels Strange Heaven (A Governor General's Award for Fiction winner) and Saints of Big Harbour. Coady, a Maritime writer who now lives in Edmonton, fills her stories with such memorable and tragically human characters, who are alive with such dark humour and whose lives are filled with the ravages of wounded families, alcoholism, and poverty. Yet they are wickedly, wickedly funny. 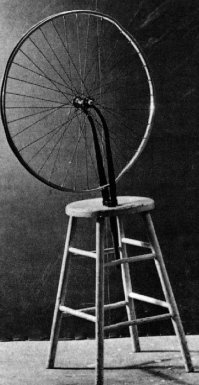 "DADA: Making sense of a movement that was all about nonsense"

The National Gallery of Art in Washington is launching an exhibition of dadaism. Dadaism was an art movement that began in Zurich during WWI as a protest against the absurdity of war, and was spearheaded by pacifists, draft dodgers and rebel artists. Dadaism focuses on the absurd, using everyday objects rendered useless, nonsensical collages, found objects offered as art, among other subversive techniques. It caused an uproar and was deemed ugly and blasphemous (which was the whole point), but now is seen as quite lovely.

Posted by Barbara Bruederlin at 3:48 pm

You wanted headlines?
[actual] HEADLINES OF 2004:

Something Went Wrong in Jet Crash, Expert Says
[no, really?]

Panda Mating Fails;
Veterinarian Takes Over
[what a guy!]

Juvenile Court to Try Shooting Defendant
[see if that works any better than a fair trial!]

War Dims Hope for Peace
[I can see where it might have that effect!]

If Strike Isn't Settled Quickly, It May Last Awhile
[you think?!]

Cold Wave Linked
to Temperatures
[who would have thought!]

Enfield (London) Couple Slain; Police Suspect Homicide
[they may be on to something!]

Man Struck By Lightning: Faces Battery Charge
[he probably IS the battery charge!]

Astronaut Takes Blame for Gas in Spacecraft
[That's what he gets for eating those beans!]

Local High School Dropouts Cut in Half
[Chainsaw Massacre all over again!]

Hospitals are Sued by 7 Foot Doctors
[Boy, are they tall!]

hahaha, Barbara-mtl - those are great! I'm assuming they weren't all in the same day's newspaper, that would be too great.

lol I don't know the sources. Did I ever tell you my brother is a headline writer? Well not really. He is a copy editor for the only english daily paper in this city. I won't name names. He is responsible for the headlines as well as any typos, commas, or corrections that need to be made. Not those headlines though. If they came from his paper I am sure he was off work that day. That is why he won't read my blog. When he is off duty he does not want to see all my/anyones typos, lack of commas, and lack of bias.

Well if that's not the coolest job ever! How fun would that be? I love finding typos, grammatical errors, etc. It speaks to the anal-retentive in me.
Your brother is a lucky guy.

It runs in the family but it skipped me. I am 'MissPelt'.
My brother can edit and write like a pro in french and english. He and his gf both work at the paper. For homework they read 3 eng newspapers and 2 or 3 french newspapers each day. Still think it's a cool job? :-)

YES! That sounds like my idea of heaven, actually, but then I'm a little sick.

I just wanted to take this opportunity to say that hunting is for retards. Unless of course, you are doing it to survive. Then, it's survival of the fittest. But people who think it's "fun" and "sporting" to kill an animal and then put its head on your wall need to get dropped off in the middle of a warzone and then find out what it's like to be hunted.

I don't understand what's so fun about killing something.

Jeff, you are preaching to the choir here. I guess I really can't point fingers too much, as I eat meat, but killing for recreation is so repulsive to me. Trophy hunting is particular is repulsive.

I love dada ... what a fantastic artistic movement.

Yes, Will, I agree. Dada was amazing and continues to be so.

I watched a bit of the Academy Awards last night and noticed that the Crash director used a dada quote: "Art is not a mirror, art is a hammer". (At least I think that came from a dadaist)

I was happy to hear about the ban on grizzly hunting as well.

Note to self: do not take Neil grizzly hunting next time he's in Calgary.
Glad you're not a killer, Neil!