Report from the Provinces

My mole imbedded deep inside the Fisheries Branch of the Water Stewardship department of the Government of Manitoba informs me that my blog has been blocked from viewing on the Manitoba government computer! Apparently it contains "questionable material".
Hahahaha that is fucking hilarious!!!!!!
Moi? Questionable material?
I am inordinately pleased by this. Somehow I feel as though I have arrived.
The banishment seems to have started the day I published a post with the title Fuck the Fucking Fuckers. Okay, I can see that. But it was lifted yesterday when I published a post entitled Jesus will sing Joy Division in BBC Easter Special.
Perhaps the name Jesus triggered the green light, or maybe the word Joy in Joy Division. They are obviously not aware that Joy Division was the post-punk band that ushered in the beginnings of rave culture, or that Joy Division themselves took their name from the groups of Jewish women who were kept as sex slaves in Nazi concentration camps.
See, you have to delve a little deeper than the surface sometimes to get the true meaning of something. And they think the word fuck is offensive...
-----
Back in Alberta, I realised the other day that Alberta's centennial year is now officially over, and I breathed a huge sigh of relief. Because, mercifully I heard the official Alberta centennial song, called (oh so cleverly ... yeah right) Alberta! only two or three times.
Originally, I thought the idea of an Alberta centennial song was a pretty good one; there are lots of talented songwriters living here who could pen something worthy of the occasion. There are lots of great new bands forging a place for themselves here: Chixdiggit, Hot Little Rocket, Corb Lund band, to name a few who could do it justice. Heck, even an old chestnut like Ian and Sylvia Tyson's Four Strong Winds would fill in nicely.
What did we get instead? Well, you judge. Here is the first verse, just to give you a taste:
Flatlands, rollin’ plains
Clear blue skies, prairie rains;
A tapestry of colours in the fall.
Snow covered mountain tops,
Wheat fields, canola crops;
Alberta has it all.
Now, I'm sure that the writer, Mary Kieftenbeld, is a very nice person, who probably loves horses, or some damn thing, but honestly, that is the most hackneyed, cliched, cornball piece of puke I've laid eyes upon in a long while. If you are actually brave enough to listen to it, click on the link - they've got a sample, may God have mercy on your soul.
Bring on 2006.
------ 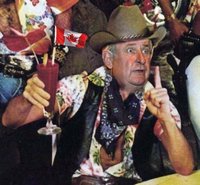 Finally, our illustrious premier, Ralph Klein, has been declared by popular vote, the funniest Albertan in 100 years.
I can get behind this. I hate the man's politics and his troublesome habit of demolishing hospitals and shutting down schools, but God Damn, the things that come out of that man's mouth. They had his mouth duct-taped shut during the federal election to minimise his chances of inadvertantly jeopardizing the Conservative fight for power. And I guess it worked.
Time to let Ralph make another impromptu comment on the social conditions in Alberta.
Come'on, we need a good laugh.
Posted by Barbara Bruederlin at 4:53 pm

I guess I missed the funny. I've never seen him say anything or do anything funny. Interesting.

There is total glee in being banned from a server! Although I don't have the prestige of being KO'd from a governmental site, I do have the honor of being given the big NO from school district sites. I don't understand why, though... it's not like I use the word "Fuck" in my fucking titles or anything. ;)

I had no idea that Joy Division's band name is derived from the concentration camp atrocities, that's deep. You give good schooling - I'm feeling extremely humbled by that knowledge. My respect for them went up a thousandfold by that, thank you so much for sharing that factoid.

"Alberta!" is your provincial song? Now that's original, you should be PROUD! Our state song is "Washington, My Home." ha.

That picture of Ralph Klein sorta scares me. If he's representative of what Alberta is about I may have to move there.

Stephanie - I'll admit that King Ralph's comments are more of a horrifying and mean sort of funny, more of a "I can't believe he just said that", which is scary, really.


Michelle, corrupting the kiddies is very lauditory as well. I think the school board just has it in for you personally, because you challenge them.

I have to admit (once again) that Eva actually educated me on all things Joy Division, so please save your respect for she who deserves it. I merely parrot her.

I wish I could say that was an untouched photo of Ralph, but it was actually shamelessly stolen from Rick Mercer's blog. He is a Canadian comedian/political satirist who frequently posts pictures of politicians and asks for people to be creative on them with Photoshop. His motto is along the lines of "that's why cubicles have walls".

Let's all get together soon for a rousing rendition of "Alberta and Washington! Our homes!!" It will do wonders for diplomacy between our countries, I'm sure.

tell me do you here the Joy Division influence in this band?

he is like george bush...scary but entertaining due to his bizarre stupidity.

Sean - I haven't heard enough CYHSY to form an opinion on that, but I do hear a lot of JD influence in a lot of other bands. They were arguably one of the most influencial bands ever.

Eva is the GirlieBomb - with her talent for ferreting out information I'm thinking she'd make a great investigative reporter. Or musical gossip susser, heh. Either way, I have to give kudos to you, too, for being the kind of kewl mom every kid should be so lucky to mommify. She might be awesome but she has your genetics. That's something to be proud of, woman!

Time to go do some research on Ralph Klein, he sounds like an absolutely fascinating individual. Eccentric, intelligent, and fearless - OH YEAH.

Kellee, I thought I was banned from Matt Good's site for a while, but he said he never did ban me, so it was some kind of ip address glitch I guess. It got all better when he switched to login.
If you really want I can ban your ass off from my site mwa haha. Except I don't know how. And I would NEVER want to.

Michelle: GirlieBomb!! LOLZ! However, I think Eva transcends the gene pool in this family (although her dad is pretty smart).
Please be careful investigating Ralph Klein - you don't want to get sucked into the vortex.

HEY, I just got back about an hour and a half ago from being on The Hour and it was AWESOME. you will have wild fun tomorrow I promise. go early, bring photo ID and rock out.

Jian was not there.
I was very sad.

I made this fact known and George was like "So, you have a thing for Jian?" I was like HELL YES, and things were good. win ...

good show. George rocks. tell me all about it.

You absolutely kill me Ruhee! I heard that George was going to make a call to Jian for you after the show. Jian will be yours yet!

We looked for you sitting beside Dave Irwin but only saw a little kid in a hat. I know you're not all that tall, but that wasn't you. Where were you? Were you really in the front row?

did I say beside? I was directly behind him. in the red and yellow homemade Sloan shirt that I got for Christmas from a friend. I was sitting in the centre block of seats in the second row.

Ruhee - good for you for wearing the homemade Sloan shirt! So you were definitely on camera. We were standing in the centre part where George enters, so we spent quite a lot of time talking to him. In fact, he was leaning on Eva and then covered her ears up when he was telling Graham that they shouldn't screw the show up.