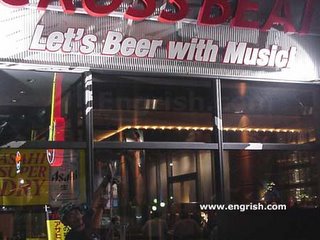 I've been spending waaay too much money on cds lately. We're going to be eating dog food until payday. Here's what I bought in the last week:

Belle and Sebastian - The Life Pursuit
- and now I have to buy it again, because I just found out that the limited edition (with DVD) is available in Canada. I need to see the concert footage as those little weasles refused to come to Alberta on their NA tour (okay I can't really blame them for that).

Plus, Eva's friend in Norway (who's a huge B&S fan) says that there's a mock fight scene where Sarah Martin shoves Stuart Murdoch about and he complains "why am I so weak?" Awww, Stewpot! If that doesn't break your heart, well, you haven't got one.
Here's what the NME said about The Life Pursuit: "B&S are still perverse, still twee, but strong enough to take on the bullies".

Belle and Sebastian - Push Doorman to Open Old Wounds
I know I know, 2 B&S cds in one week, I'm some kinda sicko. But it is incredibly good and it's a two disc release and it has all their great EPs on it as well.

Sarah Harmer - I am a Mountain
I bought this mainly for Escarpment Blues,which is a gorgeous powerful environmental plea to save the Niagra Escarpment. Stunning. Sarah Harmer has such a beautiful voice.

Primal Scream - Screamadelica
I bought this for Eva to celebrate her getting into IB. Haven't listened to it.
She was really looking for the Buzzcocks or Pulp, but the crap-ass record stores in the mall didn't even carry the Buzzcocks and they would have had to order in Pulp. Sheesh. Must make trip down to Megatunes... no, stop me ... must burn debit card!

We Are Scientists - With Love and Squalor
Prior to buying this, I had heard a couple of WAS songs and liked them. Then I read a number of reviews of this release which claimed that the problem was that this cd was too lively. And I thought a) what's wrong with that, and b) how is that even possible?

Upon first listen, I have to say that the problem is not that this cd is too lively, it's that it is too much of the same. Same rhythms, same speed, same vocals, same intensity. When a song finally came on that had the rest of the band doing harmonies, I thought "oh thank god I couldn't have taken any more of the same song over and over". I think I'll pick a couple of songs for mixes and never listen to it clear through again.

Novillero - Aim Right for the Holes in their Lives
I've talked about this cd already in yesterday's post, but this Winnipeg band deserves our attention. I am making them my newest project in my nefarious plot for world dominance through Canadian music.

Radiohead - OK Computer
I know! I know! I didn't own this cd before, shame on me! But don't tell anyone or I'll have my scenester membership card revoked. It's a classic, what do I have to tell you? And Let Down is currently on the National Playlist - vote for it! The world needs more Radiohead.
@@@@
On the money-saving side, I was too late to get tickets for Franz Ferdinand/Death Cab for Cutie. They sold out in 20 minutes.
Still not a record, though; all the Pixies tickets went in 8 minutes a couple of years ago.
(I didn't get any of those either)
Damn I hate saving money that way!
Posted by Barbara Bruederlin at 3:09 pm

Holy shit, you spent about as much as I do in half a year on cd's.

It's disgusting isn't it, Neil? And that's not counting the concerts - yikes! I am just a greedy music PIG!

Wow I have not bought a CD since I purchased 'Rent'. There is this thing called radio that plays music for me for free. Ok it's not my choice of music. That's why I vote on Jian's site. I won't download songs 'for free' but I am too cheap to buy them. I think I am the poorer one for it because it leaves me music ignorant. I learn so much from The Hour about music and all the related culture.
As I learn from you as well.
Thank you.

At least you pay for it. You are keeping those musicians going. :)

OMG I cannot believe you didn't have OK Computer. That CD is such a classic. le sigh

Barbara-in-Montreal, the only radio I can tolerate is CBC. I do get some good tips from National Playlist - there's a good cross-section of music-type people giving their input to that show. Generally on The Hour, though, George either loves stuff I already love (The Clash, Matt Good, the Weakerthans, Mary Gauthier) or he loves stuff I hate - ie medal - I've never been a medal fan.
Basically we all learn from each other.

Neil, I do believe you are confusing me with my new buddy, barbara-in-montreal. BIM meet Neil, Neil meet BIM.
But yeah I do pay for music. And I'm told that musicians make 12-18 cents per legally-downloaded song, but $2.00 per purchased cd. So I buy cds; also I always end up discovering a song I love on the cd which I didn't want to hear the first 50 listens, so.

Stephanie, please don't tell the scenester union - I'll be kicked out. I don't know why I waited so long to get OK Computer. It's brilliant!

you secret is safe with me!

Stephanie - I knew you had an honest face! I owe you one.

Hey wait a minute. Your profile says you don't like shopping...

Ah, Barbara-in-Montreal, buying cds is not really shopping - it's love.

Good for you Barbara, someone needs to keep the CD biz going. I actually just bought Madonna and Women in song 200 for a road trip and it was sticker shock- $45 for 2 cds! I will now devote my life to keeping Let Down on the National Playlist. One of my all time favorites, if you get a chance read the words, it's sad but somehow consoling.

Thanks for backing Let Down. It is absolutely breathtaking. Funny how you should find it sad but consoling, because I sent Jian an email yesterday telling him how Let Down lifted my soul and that I thouhgt Thom Yorke's soaring vocals were transcendent (while he's singing about being squashed like a bug on the ground, teehee). I think Jian thinks I'm some kinda nutbar.

Holy smoke. A few CD's there... I haven't blown a paycheck on so many CDs at one time in ages. It's so satisfying in some bizarre way when you do that.

It is satisfying, Jeff. And then you feel guilty, and then you listen to them all and you feel all satisfied again.

I think Let down is so beautiful, someone said that Thom Yorke uses his voice as an instrument. Wait, it was Jian or George.
It meant a lot to me at a time when I was very down and out, so I guess I associate it with sadness but I find it very empowering, and you said it trancendent. Depending on your mood "One day I am gonna grow wings" can be a battle cry or just "hysterical and useless". I can't believe I have never seen them live.
It's great you told Jian what you thought, maybe he'll call you for the playlist next week, will you be ready?

And yes, I was drunk on 2 days with my sisters and bought cds in Chapters, of all places.

Oooh Jacquie, stay out of Chapters when your sisters are around! Way too much money squandered with sisters!

Very true and well put what you said about Let Down being simultaneously sad and uplifting. It's great that you can still enjoy it when you associate it with a bad time in your life. That's difficult to overcome.