I'm Starting to Get a Serious Hard On
Only three more sleeps until the New Pornographers hit town.
If you want to know a little more about the serious talent encompassing this power-house indie collective, please check out my contribution to the blog at Calgary entitled "It's Porno Time".
The NME may have referred to them as "trout-faced, cardigan-wearing supply teachers", but the NME can be such fuckers sometimes (although they are pretty funny). That said though, Carl Newman only writes the catchiest, most melodic hooky songs in existence, Dan Bejar is an incredible talent in his own right, Kurt Dahle is a Limblifter, Kathryn Calder is Carl's niece, so she's gotta be talented, right?
And Neko Case.
Ahhhhhh!!!!!!
I have to admit to having a bit of a hetero girl crush on her. She is so beautiful, with such an amazingly powerful voice, and she is incredibly cool and sassy.
My only beef is the absence of Belle and Sebastian from this concert. They are double-headlining with NP in other centres across North America, but alas, not Calgary. I'm sure the opening band, Novillero, will do an admirable job, but they don't have Stuart Murdoch, do they?
****** 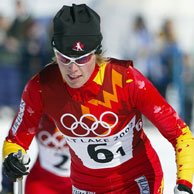 I'm also pretty pumped about the Olympics. I have high hopes for curling, hockey, and speed skating. My colleague's wife is one of the speedskating coaches. I hope we get to see her on tv, like we did at the Salt Lake City Olympics. That was pretty cool, and she is very tv-genic.
My biggest applause so far in these games, though, goes out to the Norwegian cross-country ski director, Bjornar Hakensmoen, who rushed out to hand Canadian Sara Renner a new ski pole when hers broke at a crucial moment, allowing for the Canadian team's stunning silver medal placing. That magnanimous gesture may well have cost the Norwegian team a medal, as they finished in fourth place.
You Norwegians are all right!!
Posted by Barbara Bruederlin at 5:16 pm

Hey Barbara..Did you see the link of www.cbc.ca/thehour to your blog about meeting George??? Pretty cool!!!

Wow, Monica, I didn't see that! That is so fun! I feel like such a big swinging dick now. Thanks for letting me know.

Isn't that a great story, Neil? That really embodies the Olympic ideal, in my opinion. Makes me want to hug a Norwegian.

hahaha Big Swinging Dick....isn't that the name for the boys? lol

yes, Bev, yes it is, and it's such a good name that it deserves to be used more often.

Aaaw. Really though, it's natural thing to do. Olympics is all about competing on the same level, and you can't do that with a pole less. It's only staying true to the spirit of the thing.

You are absolutely right, Camilla, Norwegian. That is what the Olympics are supposed to be all about, but too often that gets forgotten in the quest for medals. Fortunately, Norwegians maintain their sense of fairplay and social justice. I'd love to buy you all a beer!