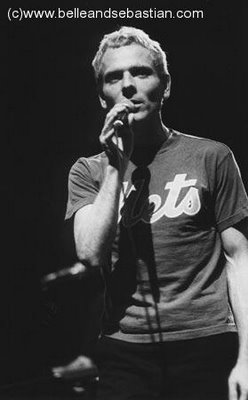 Get me away from here I'm dying
Belle and Sebastian played Toronto last night (with the New Pornographers - argh!) and now I'm all mad at them again for not coming within 3 million miles of Calgary. Damn, I knew we should have gotten Seattle tickets!
All the buzz around the internetz is along the lines of:
"Before you die, you have to see Stuart Murdoch dance - it's cuter than kittens!" Awwwwwwww!!!!!!!
But I did break down and buy the limited edition version of The Life Pursuit, which has a DVD with concert footage and Sarah Martin beating up Stuart. Maybe we'll watch it later today and pretend we were at the concert.
*****update*****
Aaaaaaaaa!!!! We just watched the DVD and we were going "awwwww" through the whole thing. Stuart Murdoch dancing is the most adorable thing ever - cuter than sassy kittens, actually.
I think Stuart must cut his own hair, or maybe his mom does.
His speaking voice is even more devastating than his singing voice, if you can believe it - thick Scottish brogue. Beautiful! 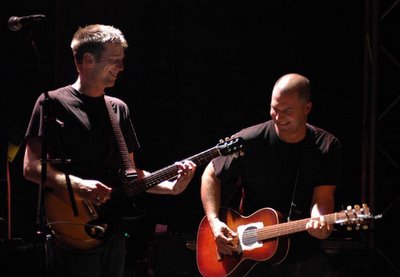 We watched Wedding Crashers last night, and I thought it was engaging and funny, but my favourite part was the closing credits, because they played the Weakerthans' Aside. Yay! Closing credits, not just some crappy little cut-away, that's big time, baby!

Good for the Weakerthans! I hope they made a pisspot of money, because they deserve it. And it's a film, so I figure they maintain their artistic integrity (they won't even appear on tv). It's not like it's a car or Viagra commercial or anything like that. A band's got to eat.

Posted by Barbara Bruederlin at 2:18 pm

Check it out. That's for you. XD (Yeah, it was supposed to say Episode 4 as it's the rejected intro for E4, but I goofed)

Yay! Thanks Ruhee - I'm lookig forward to the listen!

B&S are great live. I've seen them twice and they're always great fun. They make the audience feel like they're part of the show.

Jen, there were a pile of hilarious moments in the film - wasn't Will Ferrell over the top (again)?

Ben, I am so unbelievably jealous. They only hit a few places in North America and no where near where I live. So I watch the dvd instead. *sigh*

Hey Barbara! I just heard Jian G reading your letter to him on the national playlist! well done.

What!? Jian read my letter today? Maybe he doesn't think I am such a crackpot after all. Must have been the Radiohead one. I'll have to make sure I listen to it later. Thanks for the heads up, Barbara-mtl! (He actually read one of my Weakerthans ones during 50 Tracks - remember that show?)

Yes it was about you buying the radiohead OK Computer CD. Since you now have that door open, ask him if he could play some Three Dog Night. I just rediscovered Three Dog Night. Maybe I should write him...*sings* 'One is the loneliest number'.

Write him, Barbara-mtl! Pitch to Jian why he should put that song on the playlist. It's lots of fun, and oddly addictive.

I think I am too shy to pitch a song on the national Playlist... How was the card reading? Hit or miss? You can tell me the truth. I can take it.

Barbara-mtl - I'm sending you an email about that.

YAY Barb! I knew I had heard that song before. Go Weakerthans!
xoxoxoxo

Yes, that was our lovely boys, Kellee! Now maybe they can afford to eat something.