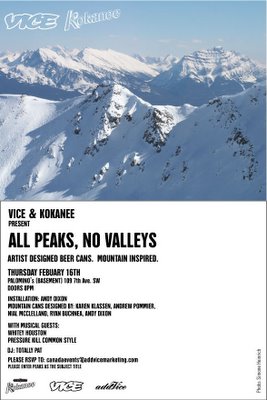 All Peaks No Valleys
The Event: launch parties in Calgary (and Vancouver) to showcase the release of Kokanee's new series of beer cans
When: Thursday February 16th, 8pm
Where: Palomino's (basement) 109- 7th ave. SW
Talent: Installation - Andy Dixon
Musical Guests: Whitey Houston, Pressure Kill Common Style, DJ - Totally Pat
****
Why do I mention this:
I got an email from Steve Mckeon of addVICE Marketing yesterday, asking me to consider plugging this event, offering to put me on the guest list in exchange for the favour. I have to admit I was hesitant at first. Ethics and all that. I had to ask myself - do I want to be a corporate whore?
I also admit to being flattered, this being the first such pitch I've received. Likely folks get asked stuff like this all the time, but I am yet a virgin at this game.
When I looked at what the event actually entailed - the launch of the Kokanee Mountain Can Series, where each beer can, depicting a different western Canadian mountain, was designed by a Canadian artist, I knew I had to get behind this.
I'm all for supporting the arts, especially public events.
And I like beer.
Posted by Barbara Bruederlin at 7:44 pm

I love Kokanee - I wanna go (whine). Happy V-Day! What did you get from Eva and Jerry?
xoxoxoxo

Oh man, Kellee, Jer gives me flowers and a big-assed box of Callebaut chocolate every year, and I completely suck at doing anything romantic. I got him a stupid card with a kitten on it and some Safeway nuts! What did you get from your lovey?

With you on the beer, Stephanie (although I prefer Big Rock but don't tell Kokanee).

Whitey Houston is a great 2 piece band in the style of Death From Above 1979...bass and drums...sweetness is so simple....

Sean, when I first read the name I thought it said said "Whitney Houston" and I almost puked. Thank God the reality is much much better.

Barb, you are a celebrity. Remind me to get an autograph from you right away! :)

hahaha Jas - a celebrity in my own mind!