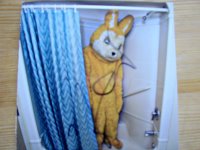 ... our man Matt Good will be on The Hour again on Monday night as part of an election night panel. It appears that The Hour will only be on once that night, in the 8pm ET slot, but I think to be safe, it would be best to stay home on Monday and watch CBC Newsworld all day long ...

... The Hour is coming to Calgary February 6 and 7!!!! Tickets will be mine, mine I tells ya, because George Stroumboulongname and me, we're like this now ...

... I can only think of two Welsh hiphop bands - Goldie Lookin Chain and Super Furry Animals, and SFA are not even strictly hiphop ...

... I will never watch the film Karla. Its very existence is testing my feelings about censorship, but I have to stick to my principles. I refuse to in any way pay homage to these two sadistic people who kidnapped, tortured and murdered teenagers in Southern Ontario. Burn in hell, Paul Bernardo and Karla Homolka.

... is it just me or is Julian Casablancas (the Strokes) sounding more and more like Rufus Wainwright? He is starting to affect that slightly exasperated, slightly bored whine. Maybe it's a New York thing.
Not everyone agrees though. Here's my conversation with the resident music nerd in the car this morning:
me: don't you think that Julian Casablancas is channelling Rufus on this song?
Eva: no, he's just pissing me off!
We both agree, however, that Rufus is waaaaaaaaaaaaaaaaaay prettier. Plus he has the best sideburns in rock.
Posted by Barbara Bruederlin at 10:05 am

That Julian guy is FUCKING HOT!!!!! But you know I have a weakness for shaggy, emaciated rocker boys...sigh. Be sure to post the new clip from your show..I am still waiting to get wireless so I can watch the last one as I am impatient and don't have FIVE hours or whatever to download it on shitty ass AOL. That George guy is cutie too, go hang with him! He'll find you as irresistable as the rest of us! ;)
xoxoxoxo

Kellee, you don't think Rufus is way cuter? I sure do, but then, I have been called a fruit fly more than once.
Yeah, George won't be able to keep his hands off me, that's the only reason The Hour is coming to Calgary, LOLZ!

are ya? are you thisclose with georgie? haha you should have seen my reaction when he said that the hour is coming to Calgary. yay! Perhaps it will be a 'reuinion' of those that were at the event in september as I already know a few people who hope to attend!

I have only this to say:

Rufusomgaghahsghaj;
(i.e. I wish I was a gay man)

Monica, I think anybody who has ever met George feels like his best friend; he just has that effect on people. Of course, in my case, I know that to be true.
I will see you at The Hour, my friend!

Ruhee, I could not have said it better myself. Rufus makes me feel that way too. I wonder what he thought of Brokeback Mountain.

I am not paying any homage to Karla et al either.....

Jas, I sent The Hour an email and invited them all for supper at my house while they are here. Seriously.
Jian Ghomeshi never did show up for supper though when I invited him when he was in Calgary for a week. I should be pissed off but he's too darned sweet.

There is a sick place in hell / damnation of choice for anyone who would even THINK to make $$ off of Karla Homolka and her horrific crimes. Let the poor families be, the healing is undoubtedly hard enough without having some greedy opportunist rehashing the tragedy. *throwing rotten tomatoes*

On a happy note, I'm thrilled you're getting to hook up with your homie George, it sounds like a blast girlie!

But naturally, you are invited, Jas. I'm sure George would be furious if you were not there.

Michelle, hi!
It sickens me that the brains behind this film can't think beyond the sensationalism, and from what I understand, the film is also poorly done. Throughout all this, though, the French and Mahaffey familes remain gracious and dignified. I don't think I would have it in me to do so.
But yes, everybody's buddy George is coming to town! I will get tickets if it kills me.

OH I WIN, I just noticed you put me on your quote of the day.

I feel so honoured! I never thought I'd be witty enough to merit a post like that.

Oh Ruhee, you are totally witty! And Rufus fans all over the world will thank you!

ummm im not entirely sure why ppl r so upset about the Karla movie? Movies are made about serial kilelrs all the time...books are written etc....i mean yeah i get it that it glorifies the pair or shitheads but...i guess i just dont think its really unique...

Jen, I think this one just hits a little too close to home for me. I lived in southern Ontario during the murders and am still haunted by the smirks on the faces of that pair, contrasting with the stoicism and dignity of the families of the murdered girls. I can't forget that and I don't want to see those actions glorified. It's a personal choice.

I don't know much about it, but I do know that other people's misery=the money lining someone else's pockets. We as a race are fascinated by insanity...we don't condone it, but we read, watch and study and/or glorify it with a passion. So I wonder which is the worse of the two evils?
AND ON A MUCH LIGHTER NOTE:
I GOT MY MIXES YESTERDAY...YAY!!!!
THANK YOU THANK YOU THANK YOU!!!! IT WAS A CRAP WEEK, AND THEY MAKE IT MUCH BETTER!
XOXOXOXO
PS:I TOLD you Jen C. makes kickass mixes too! You two are in the wrong businesses...you need to be the compilers of the mix CD's they sell on TV at midnight~! ;)

Yay! Glad you got the mixes Kellee. I always wonder about sending such sensitive material across the border har! Glad you are enjoying them - I'm really digging Jen's mix, except that Jerry keeps stealing it for his drive to work!
I wouldn't actually have to stay awake till midnight in order to make the mixes they sell on tv at that time, would I? Cause then I'm in!

No election-style matt good for me...

aw, that's a damn shame, Rob. I'll bet The Hour posts some clips though. You know that George Takes Matt Good to the Newsstand is online?
check it out:
http://www.cbc.ca/thehour/archive/s2_nov4.html#nov30

Yes Kellee, that is the fabulous Rufus Wainwright. I knew you would like him. Ain't he purdy? I just heard his sister Martha say that both of them wanted to be Annie Lennox when they were growing up. I think Rufus is closer to achieving that than Martha.