I'm going to end up on Jerry Springer

God help me, I'm turning into an indulgent, I'll-give-my-kid-anything parent. Pass me a folding chair, I'm heading straight to the Springer show. I've actually spent the last couple of days trying to figure out how Eva and I can get to the Belle and Sebastian/New Pornographers show in Toronto.
Belle and Sebastian AND the New Pornographers!
Together!
What a dream concert - that's bigger than the Weakerthans/Constantines show we saw in March! 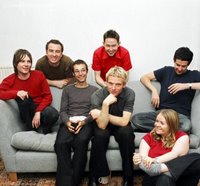 A year ago I hadn't heard of Belle and Sebastian, the Scottish indie collective, and now I am mad for them. I didn't expect to like their music; it's boy-girl vocals (which I am just now starting to get into), and lilting melodies, albeit with some pretty dark subtexts. And Stuart Murdoch, the song-writer, main boy vocalist, and all-round wunderkid behind B&S has the sweetest voice this side of heaven. Although the NME refers to it as a "gay choir-boy yodel", I have to protest that he does not yodel. Jury's still out on the gay part.
They don't make it to North America all that often and only to the big-assed cities in Canada (you know who you are, you centres of the universe).

I have written about the New Pornographers before, about what an amazing voice Neko Case has and how gorgeous and sexy she is, and what insanely catchy songs Carl Newman writes, even though the NME (again! those bastards) refer to him as a trout-faced, cardigan-wearing, supply teacher.
They are quite simply one of the best bands today.
+++
Eva was quite bummed out that they weren't coming to Alberta at all and is convinced that Stuart Murdoch personally hates her. We actually looked into flights and making a side trip to London to visit Jerry's mom to justify our madness, and then found that they had changed the venue to a +19 show (as was the Vancouver show).
The insanity got to the point where I discovered that the Seattle show was all ages and started looking into flights before Eva (dear sweet sensible Eva) said "Mom, let's just stop the insanity now. It was a nice fantasy, but it's getting out of hand."
+++
So to honour my great kid, I have written a song for her from Stuart Murdoch, sung to the tune of Lord Antony:
Eva, we're not playing in Alberta
cause you're all homophobic there
and you called me vaguely gay
And we're only going to play +19s
so you still can't go
even if you fly
because I hate you
but keep buying my records
because I like to eat food
even though I'm quite skinny
So maybe in five years
you can come see us
when you're 19
and visiting Glastonbury
Posted by Barbara Bruederlin at 3:11 pm

i thought the legal drinking age in the uk was 18.

meh, it was creative license - so sue me. The cadence is off as well, what are you going to do about that?

barbara, have you heard of the band called "Death Cab For Cutie"?

They've got some good tunes. Simple little songs but I really like the melodies and lyrics that they have come up with.

Neil, I actually got Transatlanticism for Christmas, and really like it, although I find it better for the quieter moments (which I don't have many of - har!). But I hear Plans is excellent.

that song is awesome. i didn't just read it, i sang it in my head. good work

And you are such a good singer too Stephanie! Can't think of anyone I'd rather have singing it.

Eva's sensibilites have made you take leave of your adventure, woman - you had a chance to go to Seattle and you DIDN'T. WAAAAAAHHHH!!!!! I'm gonna have to give her a super wedgie for that stunt.

Hey, I was checking out your sidebar / Recent Posts and became instantly mortified when I saw that you had a Desert Island post, too. God I feel like a thought plagiarist, I really didn't know. Please forgive me, I didn't mean to step on your toes. :( My deepest apologies, Barbara.

I know Michelle, I could kill that sensible kid. Here I had the perfect excuse to drop in on you guys and she ruined it for me by being all mature and shit.

Please please don't feel bad for also doing a desert island list:
a) it's what us list junkies do at this time of year
b) one can never have enough desert island lists, yours, mine, or anyone else's.
c) your lists rocked!
d) I mean to expand on your list as well by asking people about those mixed cds they mentioned in your comments.
I am curious yellow.

Eh, the weather here has SUCKED recently, I think we're on 21 straight days of rain here. I'll be ok with Eva's cool head this time but come Spring and / or Summer, she better wear loose pants!

Thank you for your understanding Barbara. I felt like such a thief but if you're cool then I can't help but chill with you! (seriously, thanks for your grace)

Man, I have no idea who these bands are that you talk about. I'm so culturally anemic, it hurts. :-)

No no, Andy, you aren't. You see, I have no idea who the bands are that you talk about, so we just approach music from different sensibilities. It's all good.