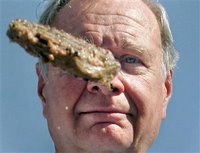 I love election time.
There are those who say that having two federal elections in the course of 18 months is waste of taxpayers' money, but I have to disagree. Where else are you going to find such good value for your entertainment dollar? So nobody is governing the nation, what else is new?
And at this point in the campaign is when things really start to get interesting.
This is when the attack ads start.
Things heated up with the instantly infamous Liberal ad:
"Stephen Harper actually announced he wants to increase military presence in our cities. Canadian cities. Soldiers with guns. In our cities. We did not make this up"
Scary, eh? Trouble is, they did make it up. They've since pulled it, but they have similar ones running. One suggests that Harper made secret alliances with Bush officials, and ends with the words "A Harper victory will put a smile on George W. Bush's face".
Oh it's grand.
The Tory attack ads are actually disappointingly lame - the most prominent showing a red balloon with Martin's face on it (making him looks like he's ready for a major coronary) slowing deflating. Sadly lame and lacking in vigour, that ad.
The Conservatives did score with a spoof ad, based on the soldiers in the street ad. (See? political spoofs are not just for Rick Mercer anymore; even politicians are spoofing politicians now, and I for one think the world is a better place for it.)
Here's the Tory spoof ad:
"Stephen Harper has a dog. You know who else had a dog? Hitler. Adolph Hilter. That's who. Did Stephen Harper train his dog to attack racial minorities on command? We don't know. He's not saying."
Brilliant.
Okay so maybe not all Conservatives are dour, homophobic, anally-retentive racists. Some of them are actually quite funny.
***
Bonus points for naming the source of the title of this post. Aw c'mon, you know this one.
Posted by Barbara Bruederlin at 5:09 pm

I'm sorry to say I can't name the source of the ad being a'merkin and all (please tell me you know what a merkin is so you'll laugh and make me feel less dweebish) but I can say that political mudslinging can get nasty. Vicious in fact.

The last 2 times GW has run for president down here were the worst in my voting history. It's terribly sad that these people, people who are voted into office to deal with domestic and international affairs, don't even know how to be civil amongst their own peers. I've seen more civilized toddlers.

Awww, but being a merkin should actually make it easier for you, Michelle. That said, I'm just ging to tease you with that and not tellyou the answer (just yet).

I realise I'm being shallow by having fun with our political process, particularly when you folks have to suffer through some pretty scary leaders. It's easier to laugh when there's no real threat.

Hey, any time it gets too weird down there, move your sweet selves up here. We can still watch South Park.

Personally I ennjoyed the NDP ad that was on before christmas that went something like: give the liberals a gift for christmas this year, and a boot came down. I only saw it once or twice so I don't remeber it exactly. It was the best ad I saw for this campaign. Not nasty, just enjoyable.

It is never easy to be A'merkin. With us the elections are very much like the Olympics:

- They happen once every four years; - They start off with pomp and ceremony but quickly degrade into minor inconsequential battles;
- They create rifts and divisons among factional groups among the "particpants" and "audience";
- Virtually no one remembers who came in second;
- The press hounds the major players for interviews that they (wrongly) think that their viewer want to see;
- Many silly moments occur along the way. Oh, and occasional bloodshed.
- It's a relief when the damned thing is done and we all get back to our pathetic lives.

Canadian elections remind me of a bar fight:

- One could erupt any time - all you need is enough people and alcohol in one place;
- Insults and punches are thrown, but few connect;
- It ends just about the time things get interesting and the RCMP is usually involved;
- The next morning most people cannot remember what it was about and it's not exactly clear who won, if anyone.

I propose a new bumber sticker - [i][b]Don't blame me, I voted for Giant Douche[/b][/i]. Needs to have a picture of Kyle on one side and Cartman on the other.

Is that Harper in a homoerotic cowboy outfit?

Monica - I never saw that NDP ad, but it sounds like fun. Wonder why it's not running anymore. I've actually noticed that the smallest lawn signs belong to the NDP; even the Greens have bigger signs!

GOB - DING DING DING DING!!! You win for IDing the South Park reference in the title.
Olympics vs bar fights - good analogy of our respective electoral systems. Have you considered a career in political journalism? You could make things a lot more fun than they are at present.
And do I feel like a dweeb. I actually knew that definition of a merkin, but had forgotten, as it really doesn't come up very often in my line of work. Sorry for dropping the ball on that one, Michelle.

Jeff - that is indeed the esteemed leader of the Conservative party, possible next PM of our nation, looking like a reject from a Village People video casting call.

GOB - "Proud to be in a merkin"... trust me, I got a damn good belly laugh from that. And what has happened to the "e" vowel in America? I was in a sandwich shop the other day, and the dude ahead of me, when asked what cheese he wanted, replied "Yes, I'd like Amurican." I mean, he spoke clear and well, with no obvious drawl. Sheesh.

It's like those weirdos down in Cincy who pronounce it "Cincinnatah", or Missouri "Missourah". Double sheesh.

Triple sheesh, Andy - up here in Alberta you'd be amazed at the number of people who speak with a Texas accent! Must be carried on the cattle-raising gene or something.

It is indeed a pleasure receive the award. But I cheated. Looked it up. I'm sorry.

I cannot, in good conscience (of which I have none), accept this award as offered here. Please mail it instead.

The very concept of a merkin makes me giggle...but considering it beyond that gets just a litte too odd. Questions arise...like "Why?" and "How?" and end with me waking up in the foetal position.

I too have noticed the syndrome noted by Grover (brilliantly, I might add). But he forgot one:

GOBster, I have checked with the contest officials and am informed that there are NO restrictions against looking up the answer. In fact you get teacher's pet points for that action.
Your grand prize of a medium-sized merkin, along with a tube of merkin glue, is being mailed to you right now. Enjoy your prize and please enter our contests more often.

Please check with the contest officials again. I'm looking for an out here, ok? I am not sure what I would do with a merkin or its associated adhesive. Perhaps a toupee for one of the stray cats in the neighborhood?

There may also be a problem in shipping the "prize" (and I use that term ever so loosely) across the border. I would hate to be the customs inspector that opens up THAT package.

...upon further reflection, please donate the award to the charity of your choice, but promise me you will not mention my name.

Keep up the good work »