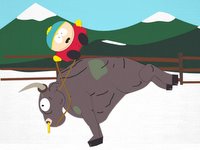 All independent movies are about gay cowboys eating pudding
(Eric Cartman)
I think in Brokeback Mountain they eat butterscotch pudding. I have nothing to base this on, I'm not sure why butterscotch, I just feel that it’s so.
Let it be known, that I am completely stoked to see Brokeback Mountain. Jen actually already scooped me on this and wrote earlier today in her insanely sassy blog about how much she wants to see it, how she loves gay cowboys.
And that actually illustrates the point I wanted to make: there’s speculation that straight actors, particularly those that fall into the heart-throb category, are reluctant to take on gay roles as it would turn off the lucrative young female audience. To this I say “BULLSHIT!”
Who wouldn’t want to see a couple of nice looking cowboys getting it on with each other? That’s a selling feature, as far as I’m concerned.

Who agrees? Okay, maybe some of you men might not be so thrilled about the idea of sweaty cowboy bodies rubbing up against each other, but hey, you never know. But I'll just betcha that all the women are. Let’s see a show of hands.
Can I get a HELL YEAH?
Posted by Barbara Bruederlin at 6:50 pm

Surely you see the discrepancy.

I have to admit, I don't want to see this movie and it's because of the gay factor.

I'm not homophobic, but I have no interest in seeing two men having romantic encounters. I'm sure the focus of the movie is not on that, but enough of it is to make me throw up a little bit in my mouth.

See, I think it's a girl thing, Neil, much as men seem to be turned on by girl-on-girl-poolside-action, which gives me the creeps.
Although I'd love to hear from someone who kicks with the other foot.

I tend to think that my hubby and yours would rather not attend the movie! lol There were many giggles at my birthday party...and that was only a few hubbys noticing two gay guys cuddling! lol

Yep, the guys in the movie seem very hunky, but when I know they are not straight I just find it disappinting! lol They would never be interested in any women that went to the movie anyway! :) My friend, a male, adored the movie, but, of course, he's gay.

Hmmm, interesting take, Bev, that you find the idea of gay hunky cowboys disappointing (although strictly speaking they would be bi - does that make it more palatable for you?)
True story about our hubbies, though. What a bunch of 8-year-olds they can be!

Hell yeah, Jen! I've got a seat right beside you there for the fireworks!

I'm starting to think that you, me, and Eva are the only women in the blogosphere who see the beauty of gay cowboy love, though.

HELL YEAH! I'm all for it. Particularly in theatres.

Seeing the film in theatres. Not gay cowboys actually getting it on in the movie theatre itself. Although ...

Yes, Ruhee! I knew I could count on you, being a woman of the world and all. Am putting you down for a definite "YES".

How was Egypt? I'd love to hear about your trip sometime. Good to have you home.

Jake Gyllenhaal and Heath Ledger? Whew, is it getting warm in here?

Oh Michelle, bless you, somehow I just KNEW I could count on you. Guys just don't get it. Although I'm sure GOB is very together on most things.

Gotta say that I'm with Neil on this one. I'm not homophobic, but watching two dudes get it on giant-size in a theatre just would make me feel all icky in a way that even a scalding hot shower couldn't cure.

If it's any comfort to you ladies, I don't really get off on watching two ladies on film kiss either. Does nothing for me... but I can watch it.

If I might interject on not-my-blog, I think that's very cool tydes.

GOB sez he's not into girl/girl sex, either. I think we're all interested in sex, regardless of gender. We have our preferences, but it's perfectly natural to wonder what sex would be like with a person who kinda knows what gets us off... given intrinsic knowledge if you know what I'm saying.

It's a weird place to go. Not all guys can bring a woman to orgasm. Not all women can bring a guy to orgasm. But we certainly know what it takes when we have the parts that get us off.

I think I'm all hot now.

These comments are getting delightfully interesting. :-) For starters... If only Heath Ledger was replaced by Peter Sarsgaard. Oh dear lord...

I've often wondered why I like watching two or more women (which I do. greatly.), and I think it may have something to do with a bit of envy. When watching women being intimate, it's like peeking into a secret club that I, or no other man, will never be able to take part in. I think that element of untouchability adds to the excitement.

YES, Andy! I think you've hit upon something here! It's definitely the unavailabilty factor at play, being a voyeur at a secret club, as you put it. We want what we can't have, we're curious about what we don't know.

Ok, not so much that I would be disappointed, perhaps annoyed that I couldn't play! lol They probably would not want me in on it! hehehe But then again.... lol

Now I want to see the movie! Darn you Barb!

I just want to say Ms. Barb that your blog has the coolest people on it! And...Ms Barb...this is where all the young guys hang out apparantly! hehe I know, they are all married or something...and you too, but I still think it's cool! Actually, I have taken boos over all of the blogs of the "other" lol and they too are amazing! I love it, love it, love it! I look forward to reading it every chance I get!!

My peeps are the most amazing - I love them dearly.