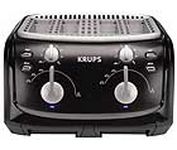 What the hell was I thinking?

Our old toaster was crapping out so I ordered one through Air Miles, but I didn't check the specs very carefully. It arrived today. It's monstrous!

You could toast a baby in that thing!

And we never toast four slices of bread at a time.

Posted by Barbara Bruederlin at 7:31 pm

Where are you going to put that monster, Barb?

Oh, I forgot to add that I love the quote.
Now I must find someone to ridicule. I dunno why, but I think Joseph is a good candidate!!

OMFG it looks like a really, really old radio! That's cool as hell!

And it's a Krups, that rocks hard. I adore our Krups coffee maker, we've had it for 10 years and it hasn't broken down. Yet. I bet that toaster of yours lasts through a few grandkids, ha.

I have been looking for something that I could toast a baby in... I have an RBC credit card.... perfect!

Jas - that monster now takes up a good portion of the counter. argh!
Our Christmas cards from Graham are always a hoot. He doesn't say much but what he says is worth hearing.
Michelle - I plan to take up massive bagel eating and later in life (much later, hopefully), throw that Krups at unruly grandchildren. Our old toaster was almost 50 years old when it died so I expect this bad boy to last well into the next century.
Jen - Industrial makes me hot too.
Neil - when are you going to invite us all over for some toasted baby sandwiches?

Kellee - I think only baby-sized annoying kids would fit, but it's a great idea. Maybe a bonfire?

Save the toaster - throw bagels at the unruly grandkids instead. Or toasted baby sandwiches, show those rugrats their fate if they don't obey your every command!

Hey Michelle, you make grandparenting sound like it's going to be fun! They will respect my authoritah!