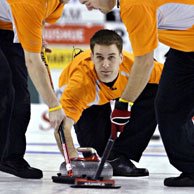 Random crap to avoid decorating the god damned tree:
- OMFG, Newfoundland is going to the Olympics!!!
I love watching curling (notice I said "watching" not "doing"), but to me it's more of a late winter sport. I just can't get my head around watching curling in December. But today, it was the men's final for the Olympic berth, the Gushue rink from Newfoundland against the Stoughton rink from Manitoba, and I just had to plop down in front of the tv. I've been impressed by this young team (they are in their 20s) since they came to the nationals about three years ago. They have decades of curling ahead of them and they are going to be a future force, mark my words.
And to sweeten the pot, this year the Gushue rink has Russ Howard playing second for them! Russ Howard!! The crustiest old bastard in curling! He yells so much during a tournament that by the end of the week, he usually has no voice left.
I did feel really badly for the Stoughton rink, as I do like them. They are from my hometown after all, and I think it's really kewl that they curl out of the Charleswood Curling Club, which is right next door to my old high school. But nostalgia will only take you so far...
I am totally pumped for the Olympics now. We've got the Kleibrink rink from Calgary on the women's circuit and the oh-so-entertaining Gushue rink featuring Russ Howard, shrieking "Haaaaaaaaaaaaaaaaaaaaaaaaaard" on the men's.
++++++++++++++

Yesterday was my lovely, smart, funny, talented, charismatic, accomplished, respected, reliable, and sweet husband's birthday. We took him out for a big-assed steak and then rented It's All Gone Pete Tong. Funny interesting film. Loved the cocaine badger. Now I want to go to Ibiza.
Hope you had a great birthday, sweetie.
+++++++++++++
The tree hasn't decorated itself yet, so I better pour myself a huge sherry and get throwing stuff at it. I don't think I can handle Christmas music yet (I usually play Kathleen Battle - she sings a beautiful Ava Maria), but I think Belle and Sebastian will fill in nicely. As the NME says " they are not twee. Belle and Sebastian rock! Pleasantly."
Hurry hard
Posted by Barbara Bruederlin at 2:34 pm

There is no better Christmas album than Squirrel Nut Zipper's "Hot Christmas". Where else can you hear a dixie jazz version of "Sleigh Bells"?

Hot Christmas? That sounds pretty awesome, Andy - I'll have to look for it.
I'm usually a sucker for the very traditional carol, but I can't resist stuff like Santa Baby (must be Ertha Kitt, of course)

Kellee, you really wouldn't want to be part of this family, believe me. Mommy gets all pissed off when Christmas gets overwhelming.

Oh, happy (belated) birthday to Jerry and many, many more! I hope he thoroughly enjoyed his big ass steak and delightfully relaxing special day.

Grover's mention of a dixie jazz version of Sleigh Bells has me all intrigued. I got burned out on traditional holiday music courtesy of my mother... she adores Muzak and listened to it all the damn time in my childhood. I think I developed a deep abiding resentment for elevators thanks to her, hah.

I hope you had fun with garland and lights, luv - it sounds so homey *me turning to goo*.

Michelle - I am intrigued by the thought of dixie jazz sleigh bells too, but I do like the traditional stuff as well - I always sing along with the Messiah and make my family cringe. The stuff that really bugs me is the Rockin Around the Christmas Tree crap.
An abiding resentment for elevators -har!
Jer says thanks!

I am up for adoption as well, Barb!

Barbara, I wanted to comment yesterday... but curling is just so damn boring to me that I couldn't think of anything to say.

Sacrilege, Neil, sacrilege! Curling is strategic and perfectly paced - what other sport could you watch and still have time to go for a shower and not miss anything?

Jas - I thought I already adopted you at work.

I'm just glad it wasn't Ferby. I can't stand that guy. My dad used to curl against him and he's just a total jerk.

Yo Barbarella! Sorry for all the confusion. Apparently I declared "Blog-Jihad" on the poseurs. You got the basics when I was up visiting...remember? I had finally had enough. I love you and your family and will NEVER EVER take you off of my blogroll!
I'll send detail-email ;)
xoxoxoxoxo

Really, Stephanie? I never knew that about Randy Ferby. You know who I can't stand? That Kevin Martin guy - I just hate looking at him.

Oooo, Kellee - the drama, the drama! I'm looking forward to reading all about it when I get home.

He almost did barf too!

Looking for US.... If you are like me it seems like there is never enough time in the day.. You get home late and leave early.. then the weekends thats another story by itself. My wife has found it easier to hire somebody if you we need help with home remodeling. She fond a great site for home remodeling at http://remodelinghelp4u.com and wanted to share it with you.. Im glad to find help when I need it.. I hope you have great luck remodeling your home...