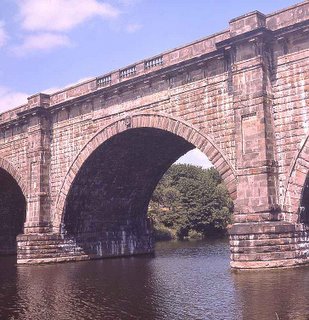 Is It Just Me?
When I was young, in my teens and twenties, I used to have this fear that I would have a sudden irrresistable impulse while driving over a bridge, to abruptly jerk the steering wheel to the right, plunging the car through the guard rail into the water below. So I would be bombing along the Trans Canada Highway, say, and see that I was approaching a bridge, and would wonder, will this be the time when I have that urge?

I never did have that impulse, and eventually the feeling that I someday would, disappeared.

Now, however, I have that same relationship with our garbarator. We have lived in this house for nine years, and I have a very uneasy truce with the garbarator in the kitchen. I hardly ever use it, as I mostly compost kitchen waste, but occasionally the odd scrap will end up down the garbarator so I'll have to turn it on from time to time. And every time I do, I wonder, will I be overcome with the impulse to plunge my arm down into the running garabator, just the see what sort of damage those blades would do to flesh and bone?

I never actually have the desire to do that, you understand, just the fear that I may have that desire (so don't phone the psych ward just yet).

Does anyone else ever have that sort of fear of a harmful compulsion taking hostage of your common sense?

Or is it just me?

Posted by Barbara Bruederlin at 3:41 pm

what do you mean that scares you...I actually have urges like that!

Oh Barb, I totally have that feeling every time I pass by the fire alarm outside the women's restroom at work. I ... Must ... Pull ...

only 2 things take control over my common sense

the other is rock and roll

...given that the latter of those 2 is almost dead, soon it'll only be sex

Tigerlilly, in that case, I'm really glad that you are still among us.

Anony, maybe it's time to act upon that pulling impulse. After all, nobody actually dies (although someone may get fined).

Rob, rock and roll is nowhere near death. Sex of course will never die.

I have had a similar urge, but with our microwave (ours is VERY old...it's a wood-burning walk-in microwave). A few years back I made good on the urge and crawled inside and set the dial to "Insta-Cajun".

Hopefully this explains much about my current state (in terms of both sanity and sanitation).

I have strange urges, but most of them don't involve seeing how much something may hurt me.

The most prominent thing I can think of that would be similar in myself, is this strange desire I have (mostly when driving) where I want to get out of my vehicle and just walk up on a hill that I can see, or into a field, or anywhere, just to wonder if someone else has walked there. The world is "small" but there are many places that no one has ever literally and exactly been because so many of us stay on the roads and paths that are set before us. Does this make sense??? :S

GOB - was it hard to pull the microwave door closed behind you? Insta Cajun sounds delic, btw. I might just make that for supper tonight.

Neil - you are such a sensible soul (and surprisingly deep). I do get those urges to touch places that have never been touched or to alternately feel the history of a place.

I also like to look in people's windows when I go for a walk and have often had the urge to ring their doorbell and tell them that they would be much happier if they moved their couch to the
other side of the room or painted their walls a different colour.

FUN!!!!!!!!! I wanna be on the "neighborhood decor critique" team - we could have some fun with that in my town..some people ought to be ashamed to open their curtains!!!
PS: Sorry about your computer - been there, done that. Glad you liked the card - it just had "Send me to Barb" written all over it!!!
Happy Hangover (I mean New Year)
xoxoxo

Kellee - and around here some people never close their curtains (and I love it).
So that's what was written all over the card, "send to barb"; I was wondering what that said. Happy headache to you toooooo!

Jas-don't play with knives. ;)
Barb-you having trouble w/my rather "flamboyant" handwriting?? hahahaha-you are not the first. Or the last. :)

Jas - that must be why Health and Safety don't like folks to wear sandals in the lab, although if you want, we can see about getting you some steel-toed boots.
Kellee - I was just joshing you. Your handwriting is 174,876,988 x better than mine.

Steel-toed shoes would be nice, Barb. Can I also have pointy steel heels, please!!

Kellee: I have dropped sharp knives, missing the toes by a fraction!! Shudder, shudder. God, I need steel-toed shoes for home as well!

Yes! I've done the exact same thing! I'm also a notorious walk-by window peeper when strolling the neighborhood... I like Kellee's critique team idea. I'd have to nix this one house down the street whose living room walls are lined in those soft-focus crushed velvet paintings of idealized and stylized Native Americans, where there's always some semi-transparent face floating in the sky.

Andy, how you have had the strength to survive when there are velvet paintings down the street is a testament to your character.
Kellee may be onto something here: a vigilante group of decor critics descending upon various towns to may them liveable for nosy walkers. Yes!

YAYYYY! Get the cam's out team! Get some funky home decor shots without getting the cops called on you! Of course you can always prove you weren't peeping by showing the cops that there are no humans in the shots, just an un-explainable case of shag carpeting adorning the ceiling...hahahaha!
xoxoxoxo

You should start a show "Friendly Neighbourhood Decor Critique"!!

I don't actually stick a knife in my arm just to see what happens, but I get the urge to do it

One small step for man, one huge step for mankind. What I am trying to say is I love your blog. Susan, feng shui interior design