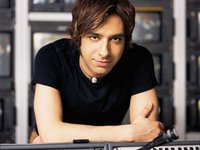 He has the eyes of an Arabian princess...
(Sook-Yin Lee describing Jian Ghomeshi)
I have a confession to make, and it doesn't paint me in a very flattering light
... I am a publicity-whore.
Nothing gives me a bigger thrill than to publish an article in Swerve, to get my email read on The Hour or CBC radio, to have my letter printed in Chart.
(Although the latter is hardly anything to brag about when they also print letters like: "major mistake: since when is Toronto Ontario's capital?" LOLZ)
I don't know what that says about me (nothing nice I suspect), but I guess we all seek validation somewhere.
So, anyhooo, I was going to rant about how I hadn't gotten anything done for Christmas yet, but then I got an email from Jian Ghomeshi, and everything changed. Now Jian is my new best friend. Jian, of course, is the host of the National Playlist (former drummer for Moxie Fruvous and current ubiquitous CBC guy) and he has in fact read one of my Weakerthans rants on air before and posted my Matt Good rant online. So Jian and me go way back.
Have you been following the National Playlist? Been voting? I go around to all the computers at work and vote as many times as I can before I get caught. Things starting going downhill when Aside by the Weakerthans was knocked off the list in week 4. And then everything went for shit at the end of last week, as I stated in my letter to Jian yesterday:
Dear Jian:
Last week was a particularly tough one on National Playlist; I can't believe we lost Drink to Me Babe Then, Love Will Tear Us Apart, and When the Night Feels My Song all in one fell swoop (but at least we finally got rid of Extraordinary Machine).
Now, however, the list is rather top-heavy with intense songs. It's time for a little levity, I think. It's time for Girlfriend in a Coma by The Smiths.
This song is the perfect foil to the somewhat heavy fare currently offered. Take Johnny Marr's lilting, happy melody and pair it with Morrissey's over-the-top angsty-ness and you have a wonderfully catchy and weird pop song. I dare anyone not to sing along.
And as an added bonus, Girlfriend in a Coma is really short, coming in at 2:02 minutes, so you would probably have room to put 11 songs on that cheap-ass ipod of yours this week.
Plus, Douglas Coupland liked it so much he named a novel after it. And if it's good enough for Doug Coupland, it's good enough for me.
And here's what Jian said:
this is great, barbara.
with you on the smiths. thanks for the fab email.
keep listening.
yours (with a smile),jian
ps - yes...the loss of a.c. newman was a major drag.
Okay, it was short, but I think Jian is going to pitch Girlfriend in a Coma. Woohoo! Stay posted.
So? Sick of me yet?
Posted by Barbara Bruederlin at 7:28 pm

Oh my, you're a celebrity, girl! You're influencing radio with your voice, what an honour!

Sick of you? NEVER, luv. I must get back into music, poor Matthew Good is collecting dust and that is so totally wrong.

Har! I'm a legend in my own mind! So you don't think I'm a pathetic attention-seeking loser? That's a relief.

So glad to be in touch with you again, Michelle. Now go listen to Matty really loud and howl along!

Radio or no radio Barb, to us you are always a celebrity!

AWWW...now I'm really pissed we didn't get a picture together - since you're famous and all that! :) I miss ya! (Finals are next week and I am going fuckin' craazzzzzyyy!) I'll email tommorow, and catch up my blog. I am a slacker. Don't hit me.
xoxoxoxo

Good luck with your finals, girl! Study hard, get enough sleep, eat a well balanced diet...do I sound like your mother yet?