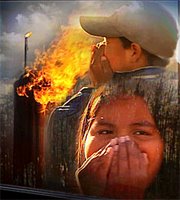 Chalk One Up For the Good Guys
Earlier this week, the Alberta Energy and Utilities Board rejected an application by Compton Petroleum for an eight month extension to develop an emergency response plan for its bid to drill four sour gas wells on the edge of Calgary. This is a huge victory for those of us concerned about the risks posed by the threat of a well explosion, sour gas, of course, containing hydrogen sulphide, which is deadly in higher concentrations. Within five years there will be a new hospital built less than 5 kms from the drill site.
Compton has already had ample leeway to develop a response plan, as this application has already dragged on for years. Unfortunately Compton has only to submit a draft by January 3 to the EUB in order to keep the application open.
But at least that application is one step closer to being closed outright.
Keep up the good fight, Calgary Health Region and people of Calgary!
Posted by Barbara Bruederlin at 3:59 pm

What's the concentration of the wells? I've worked (in the past) handling gas services that were over 90% H2S, with an Air Pack of course.

That's a really good question, Jeff, for which I don't know the answer. 90% H2S sounds pretty scary to me.

That's really not good in an enclosed area or even close to it. In all likelihood... a few miles away from Calgary, even high percentage H2S would dissipate to merely a smelly inconvenience in the air before reaching the city.

Although, I wouldn't want to bet my life on it.

wouldn't want to bet your life on it... that's comforting!
I don't know, it still strikes me as bad policy to plan a site so close to a heavily populated area.