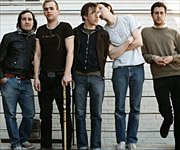 Can I Get a Witness?

My Constantines cd finally arrived and I've kissed it all over and then played it 879 times while dancing wildly in the kitchen. I think I herniated myself, but it was worth it.
The debut cd is much more raw than Shine a Light or Tournament of Hearts, and it's aggressive and heavy and driving and very political and absolutely necessary.

I am in love.
Check out some of these lyrics:
- I'm going to run my tongue over the body of the nation. I'm going to sing to all the dirty little engines. As long as we are lonely, we will dance. As long as we are dying, we want the death of rock and roll. We don't want no confederates. We want deliverance. We don't want no saints. We want the death of rock and roll. This is the music of the minions. This sound is a terminal condition.
(arizona)
- Leave no manifesto, save graffiti in the train yard. ... Suppression is a state. We will not be diplomatic.
(young offenders)
- Ink the trenchant ballads. The retail mob is bleating at the latest dead sensation.
(hyacinth blues)
- It's some missionary complex that keeps me testifying. It's time we steal these pennies back from the fountain. We stole our voice from the Cigarette City underground. We dug this noise from the gospel soil at Jonestown.
(steal this sound)
******
I am such a sucker for the angry young punk poet. I seriously love these guys.
Posted by Barbara Bruederlin at 2:39 pm