The Universe Is Unfolding As It Should
After a painful separation, the CBC folks are starting to trickle back to their rightful places in the cosmos. Here are some of my favourites who are returning after a far too lengthy absence: 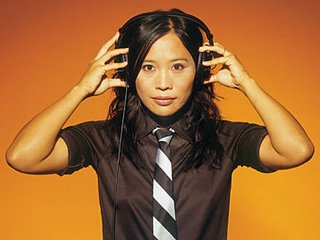 Sook-Yin Lee is back hosting
Definitely Not the Opera on CBC Radio Saturday afternoons (1:00 pm). I love her to bits. She is sweet, sassy, and wicked funny, and Saturdays were not the same without her.
Saturday, she played the Would You Rather game with Hawksley Workman. Here's an excerpt:
S-YL: "Would you rather work at the drive-through at Tim Horton's or the customer service at Canadian Tire?"
HW: "Canadian Tire! I love Canadian Tire! I love the smell of it. I love the plumbing section with all the little brass bits in the big bins. I want to work in the sporting goods section so I can get a key to that glass cabinet where the binoculars and bullets are."
Who knew Hawksley was such a Canadian Tire fan? I love him even more now. I know he's not really a CBCer, but I first heard him on CBC, so. 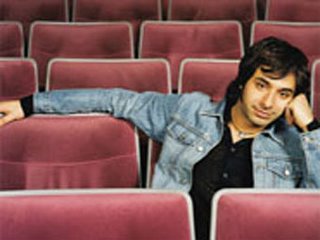 Jian Ghomeshi is getting his own show on CBC radio. It's called National Playlist and it will list essential songs to put on your ipod each week. What a wet dream for a list junkie like Jian!
Jian will always hold a special place in my heart ever since he read my email on air during 50 Tracks (Canadian) in which I championed the Weakerthans' song Left and Leaving. Jian can even outsass Sook-Yin! Radio One Monday -Friday 11:30 am.

At long last, tonight heralds the return of everybody's boyfriend, the lovely George Stroumboulopoulos, host of the best show on tv - The Hour. If you like your current events delivered to you in a mixture of in-depth analysis and irreverent sassiness, then The Hour is your show and George is your man.I know you are all going "Oh God no, she's going to tell us again about the time she met George!" Relax children, I'll save that for torturing my grandchildren with eventually. I'll just reiterate that George is the most gracious, most engaging and most genuinely friendly person you could ever hope to meet. Did I mention he's really really cute? CBC Newsworld Monday - Thursday, 6:00, 9:00, and 12:00 pm MT

Finally what can you say about Rick Mercer? That he's the sharpest wit around, that he draws a bead on anything that moves in Canadian politics, that he goes for the jugular every time? Rick Mercer's Monday Report will be starting again this week and they've moved it to Tuesday nights. Subsequently, they've dropped the Monday part out of the title, which makes sense. CBC Tuesdays, 8:00 pm
Posted by Barbara Bruederlin at 5:19 pm

I think I can now officially say that American radio blows. :( Luckily we get CBC on our cable box, but radio is a no go.

I did hear about the strike, it was bizarre as hell watching hockey with no announcers!

Here's a gift for you - CBC radio on-line:

Enjoy, you wild woman, you.

HEEHEE, I'm geeking to the French song on the St. John's channel, I'm going to have fun for hours. It's absolutely amazing to me, while listening to the Vancouver ch., how you in Canada actually talk about American politics. It's not my policy whatsoever, but it astounds me how anything "Canadian" is considered a dirty word in some sectors down here.

When I was a kid I used to have a girlfriend/soccer mate who lived in Coquitlam. We'd ride her bikes around her neighborhood and she'd ask me all these American history questions and I was so embarassed because she knew things *I* didn't know - and I live here ferchrissakes. Canadians rock pretty damn hard.

Minnesnowta Public Radio, huh, I will check it out pronto. You're so cool it hurts, ya know?

Well now you 've found me out as a fraud, Michelle, because I haven't actually heard Minnesnowta (haha) Public Radio myself - I've just heard good things about it. Guess I should really listen first rather than blathering about something I know mothing about...

That's ok, I was a willing lab rat - nice variety of tunes and once again I tip my hat to your prowess at expanding my musical library. :)

What really cracked me up was their sponsor, though. RomeoShops.com has the best tag line, heh. "Because guys can't shop." Gotta love it!

Okay - you've got me curious - now I really MUST give MPR a listen! Time to walk the talk!