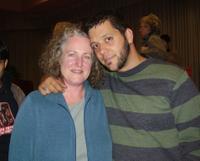 This is me with George. Must be a crappy camera
because in real life I am breathtakingly beautiful. 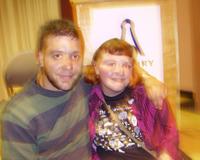 This is Eva with George, illustrating how
I truly am the world's shittiest photographer.
I 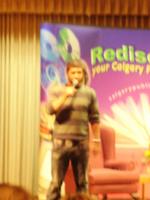 Bloody shitcakes! All the hype is true! George Stroumboulopoulos really is the most gracious, friendliest, and most sincerely nice guy you could ever hope to meet.

Eva and I met George last night after a lecture he gave at the library. He was classic George during the lecture - informed, intelligent, irreverent, funny as hell. The weird faux-beard-thingy is a protest to being locked out by the CBC.

Some of my favourite bits of the lecture:

The lecture was supposed to run 1 1/2 hours, but lasted more than 3. As you can imagine there was a tonne of interactive discussion about everything from US foreign policy to Madonna (maybe too much Madonna, but Cynthia seemed to have a thing for her - and would not SHUT UP).

Afterward, about 40-50 of us stayed to meet the lad. This is where George really shone. He took the time to meet and speak personally to everyone, take "this is me" pictures, sign autographs etc. I heard him ask a number of kids wearing rock shirts "what's your shirt say?" and then talk about the band.

And the whole time, he's telling stories and looking around, making eye contact, engaging everyone in the vicinity in the moment.

And about those famous eyes. When George looks into your eyes, you had better know how to dog-paddle or you could very easily drown in those big browns.

Anyhoooo, Eva and I had a spirited chat with George. He was horrified to know that there was a documentary about Joe Strummer's last tour that he, not only had not seen, but had never heard of (and we had seen it the year before). George, of course, is a big Joe Strummer/Clash fan and told a funny story about interviewing him, and feeling like a 12-year-old at the time because he was trying to think four questions ahead the whole time, figuring out how to get Joe to say lyrics from some Clash songs. "How do I get him to say 'Clampdown'? How do I get him to say 'I live by the river'?"

George was extremely gracious to us, was a totally active listener, and seemed genuinely interested in hearing what everyone had to say. He is one of those rare people who asks a question and really wants to hear the answer. I think that's one of the reasons he is so successful in what he does. I realise he was being paid for the lecture, but he seemed be really enjoying himself and to be completely in the moment. Most people don't have that gift.

Some facts I learned about George after meeting him:
Posted by Barbara Bruederlin at 6:29 pm

I just wanted to say I was there too! And I agree 100% with your blog about george. I have wanted to meet him for a long time and he is a very warm and kind person. Even when my friend (shes 26 im 23) embarassed me in front of him, he never changed his gracious attidue towards us for comming out to see him! I'm glad you had a great time too!

Wasn't it a great experience, Monica? George truly is unique. I love your George pics on your blog - you sure have a pile of them.