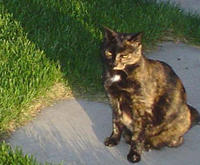 SPUTNIK
I heard the coyotes howling down in Fish Creek Park last night. First time I've heard them since the flood. The cat stiffened at the sound and then pressed her back harder against my hip. She hates animals. But she does have an uneasy truce with the jackrabbit that sleeps in the silver sage mound out front. He could kick her ass anyway.

Posted by Barbara Bruederlin at 7:26 am

We got home a little late last night too and WOW you are right. I don't know what was in the air last night, but the coyotes around our place were soooo loud! And there were tons of them too! I am not a big coyote fan....they eat kitties! We have a fox that hangs out at our house. Actually ran under one of my horses legs the other day! The horses don't mind it and the cats and the fox have an understanding....so I don't mind the fox, expect at night! Eeeek, fox sound horrible when they howl!! Sound like a cat being mauled!

So, I don't know what it was about last night, but it was noisy out there!

Well, I heard that there was a black bear roaming around Fish Creek last night, but can't imagine that would have gotten YOUR coyotes riled up.

Hey i am a fellow Calgarian and a major major major major matt good fan. he has influenced me so much not only through music but everything he is aswell. he was the reason i ever wanted a guitar. i look forward to going to the show on the 1st of November should be amazing as i have never seen a Matthew Good show before but on top of that have never been to a concert. i am 17 though so i still have a long life ahead of me to go see many more concerts. anyways should be an amazing show

Hi B Smith - thanks for posting. I saw Matt Good for the first time last year - also at Mac Hall - and it was such a great concert. Limblifter opened for him and they were so much fun that they even played an old Age of Elctric song (Ryan Dahle's old band). Matt Good truly is amazing, as a musician and a humanitarian. See you there!