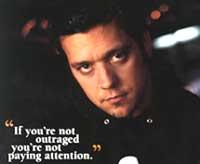 Fun with Dyslexia ... and other hobbies

I'm losing my mind, or becoming deaf or dyslexic or something.

Pretty soon, I'll be wearing a diaper and drooling my mashed peas down my chin.

The Hour was scheduled to start again tonight, but due to that goddamned labour dispute at the CBC, we get reruns of the fucking Roadside Antiques Show or some damned thing. But, haha, Eva and I are going to see George give a lecture at the main library this Friday night. Jerry has declined, even though I think he has a hetero man-crush on George (but then, who doesn't?).

Posted by Barbara Bruederlin at 6:22 pm

I did notice a little bit of strange behaviour from you last time I saw you.....I guess I was just too polite to say anything. It's ok, you know the Martha's will always be here to feed you!!

Did you spell Marthas wrong just to bug me? You did, didn't you? You know exactly which buttons to push.

Oh ya, I sure do! I believe in the way I enjoy spelling Martha's! lol

My boyfriend George is very hot indeed. If I get any pics of him tomorrow night I will send them to you. Actually I have pictures of him on the walls of my office and everybody thinks I'm a cougar.